A Few Words About "The Words"

Last Friday morning my sister Kathleen and I went to watch the movie “The Words.”  Our husbands chose not to go with us; hers watched golf on TV while mine went to Aldi’s to grocery shop.  Of the twenty or so viewers at the late morning showing I saw only one man with a woman who appeared to be his wife.  So, from my finite and unscientific observation, this film appeals mostly to women.


I have been looking forward to this movie ever since I saw its trailer. The idea of a lost manuscript being discovered is fascinating, as is a movie about the passion writers have for words, and the power of words to create and destroy. Oh, and I think Jeremy Irons is a gifted actor.


In the movie, Clay Hammond (Dennis Quaid) reads from his bestselling novel “The Words,” to adoring fans, including one dedicated groupie who wants the inside scoop after hours.


In Clay’s novel “The Words,” Rory Jansen, (Bradley Cooper) is a fair writer who wants to be great. Rory struggles financially and creatively. He is supported financially by his father and emotionally by Dora, played by Zoe Salanda.  Dora loves Rory for many reasons, one of which is his blue eyes, which are filmed up close numerous times.


Eventually, Rory and Dora get married. While in on their honeymoon he discovers an aged briefcase on a tall shelf in an antique shop. Dora buys the briefcase for him as a wedding gift.


After they return home he still can’t get published and toils at his entry-level job at a publishing company. While rejection slips mount, he discovers a faded and smudged manuscript tucked into a sleeve of the briefcase. After reading the manuscript he is blown away by the genius of it and retypes the manuscript, just to get a feel for the power of the unknown author’s words. Eventually the manuscript finds its way into print and is met with critical and financial success.


Then one day on his way to a reading Rory meets a shabbily dressed old man, played by Jeremy Irons. The old man claims the work as his own, which he wrote in post World War II while he was living in .


Now Rory is faced with an ethical dilemma.  Does he confess that the manuscript is not his? What will be the fallout if he does?


As Rory comes to grips with his inner turmoil, the scenes switch from Rory’s life to the old man’s life as a young man (Ben Barnes) and to Clay’s life as a successful and rich novelist.


I found the flashbacks to in post World War II the most enjoyable and moving. Jeremy Irons’ portrayal of the old man, although a small role, shows that in acting, as in writing, less is more. Oh, and I love the fact that the old man is a real writer who always carries a pen close to his heart, even when he is working in a garden shop. 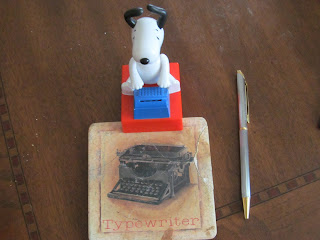 The moral of the story is that in the end, the choice a writer has to make is between fiction and life. Also, if there is any justice in the world, the plagiarist will suffer greatly because "there's more than one way to take a life."


Although parts of the movie were less than stellar, overall I enjoyed it and would watch it again, if only for the lovely scenes in and the wonderful acting of Jeremy Irons.