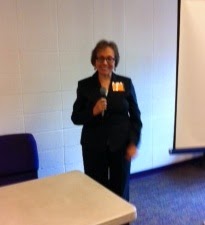 Here is the second installment of my notes from the CCMWG's Write Direction conference earlier this month.

Mary Horner  is a multi-published, award-winning writer and college teacher who gave a thoughtful and informative session on “Writing Nonfiction.”

Here are some of the notes I jotted down during Mary's presentation:

Nonfiction is based on someone's truth. It is factual but can also be emotional. Variety is what makes writing nonfiction wonderful.

According to Mary, the secret of selling nonfiction is:

* Give editors what they want
* Read the publication before submitting
* Approach editors with an idea (2 or 3 are better)
* If it's something you're interested in, that's even better
* Your passion will come through if you care about your topic
* Ask the editor for an idea if your suggested ideas fail
* Submit clean, well organized, and researched copy
* Stay focused; it's more than the writing itself, it's the framework

Make connections to your feelings so your passion comes through.

Mary's three-step process:
Make an outline – gather lots of info
Visit the library – ask  research librarians for assistance; they have access to databases not available to writers
Ask experts -- they are usually flattered you ask!

Word of caution: Research can be a time waster so set limits.

Credibility is believability.
Make sure your sources, especially from the Internet, are reliable.
Be sure to cite your research and copy url onto the work-in-progress document for future reference.
Always verify. If in doubt, leave it out.

One of Mary's favorite humorous quotes from the Internet is:
"85% of the quotes on the Internet are made up." (Abe Lincoln)

The framework for your nonfiction should be logical and easy to follow.

The thesis statement basically asks the question: What do I believe to be true?

Don't be afraid to make changes if what you discover during research conflicts with what you think you know.

Mary uses symbols in the margins of her paragraphs to help organize her works in progress.

Editors appreciate it when writers add a little something extra (a sidebar, thoughtful quotes, photographs, or illustrations).

If you would like to learn more about Mary’s thoughts on writing nonfiction, I recommend reading her book, “Strengthen your Nonfiction Writing.”

During the keynote presentation, Terry Allen showed film clips to demonstrate the points he made and to complement his lecture on film noir.

Here are a few things I learned:

Before that period, in the 1920s and 1930s, German film makers created German Expressionism films, which combined elements of film noir with horror.

The neo-noir period is the 1970s, with films such as “Chinatown” and “Blade Runner”

This year’s “True Detective”was also mentioned as an example of the genre.

Film Noir movies have a range of plots from the P.I to the fall guy.

Hard-boiled pulp novels like The Big Sleep by Raymond Chandler, with first person narrative, were mentioned as books that were made into film noir movies.

The real star of film noir is Fate.

The message is: There’s something dark out there.

The question is: Why me?

And there’s no good answer at all.

FN relies on the importance of dialogue and style. Everything has a purpose.

Text and subtext contribute to the total package, as does the music and background.

Another element is the Femme Fatale – the fatal woman or black widow who lures the good guy out of the sunshine into the shadows and causes him to do something he might not otherwise do.

One example given was how Barbara Stanwyck manipulated Fred McMurray to murder her husband in “Double Indemnity.”

This element of femme fatale in movies (and novels and short stories) brought back something my dad used to say when he read or heard about a decent guy who acted out of character and did something stupid or wrong. Dad would shake his head and say, “Cherchez la femme,” which he told me meant, “Find the woman.”

As a writer, my take-away from the film noir session is the need for consistency in dialogue, tone, mood, and style.

This session also brought to mind what Edgar Allen Poe wrote about the importance of the “unity of effect” in short stories. Everything in a story, from the title to the character name, the mood, the tone, and the individual words should combine to create a consistent effect of the piece.

Are you a fan of film noir? Do you have any favorite movies or novels to recommend?
at October 21, 2014 6 comments:

Giveaway and Call for Submissions for Well Versed 2015

Last Saturday I attended the Columbia Chapter of the Missouri Writers' Guild annual Write Direction Conference in Columbia, MO. It was an inspiring and informative event--and extremely well run and affordable!

Over the next few posts I'm going to share some notes I took during the conference, but today I have a call for submissions and a giveaway!

One important announcement during the event was a reminder about the CCMWG's call for submissions for their annual award-winning Well Versed anthology.

The anthology accepts submissions of fiction, nonfiction, poetry, and new this year--flash fiction. Members of CCMWG may enter for free. Nonmembers may enter for a modest fee.

You can find complete guidelines for the 2015 anthology at the link. Deadline is November 15, 2014.

Entries are judged independently by guest judges (for fiction, nonfiction, and poetry) who select winners in each category and make recommendations for other submissions to be included in the anthology. The judges select the top choices to receive monetary prizes. All entries selected for inclusion in the anthology receive one contributor's copy, plus a payment of $1 for each piece included.

During the conference, attendees were encouraged to take free copies of past anthologies. Of course, I took advantage of that generous offer.

To carry on the CCMWG spirit of generosity, I'm giving away a copy of Well Versed that I picked up at the conference. The 2009 issue of Well Versed (pictured above) includes a foreword from Walter Bargen, Missouri's first poet laureate, who served as poetry judge for that issue.

For a chance to win a copy of the 2009 anthology shown above, leave a comment with your name here by October 31. I will select one winner and announce the name the beginning of next month.
at October 20, 2014 7 comments:

News from AKA Publishing/Compass Flower Press

AKA Publishing/Compass Flower Press has announced the release of its first anthology, Uncertain Promise: An Anthology of Short Fiction and Non Fiction, edited by Von Pittman.

Among the contents of the anthology are these winning entries:


Other selections include the works of finalists in the anthology contest.

Von Pittman served as the anthology's editor. Following a career in academic administration, Pittman began writing fiction.  His short stories and creative nonfiction pieces have appeared in The First Line, Cantos, Crime and Suspense, Perspectives Magazine, Well Versed, Cuivre River, and Iowa History Illustrated.  In addition, he has contributed to several recent anthologies, including Storm Country (Missouri Writers Guild, 2011), Deep Waters (Outrider Press, 2012), and Educators as Writers (Peter Lang, 2006). Pittman has won first-place awards in the annual Missouri Writers Guild competition in the categories of Short Story and (2008) and Article (2012), as well as several other awards.

Uncertain Promise can be pre-ordered at a discount through AKA Publishing.

Call for Submissions: Nimrod International Journal of Prose and Poetry

Yesterday I received an e-mail with a call for submissions from Eilis O’Neal, Editor-in-Chief of Nimrod International Journal of Prose and Poetry, at the University of Tulsa.

The Call for Submissions for their Spring/Summer 2015 issue has the theme of:
Circulatory Systems: Current and Connection.

For hints at what the editors have in mind, visit the Nimrod Journal website.

Here are some guidelines:

Stories and creative nonfiction  - up to 7,500 words

All work must be previously unpublished

Please mark both your cover letter and the outer envelope with “Spring 2015 Theme.”