This spring, my writing career has blossomed because of writing seeds I planted in the cold, dark days of winter.

One of my goals at the beginning of the year was to expand my horizions by submitting to more publications and entering more contests. I'm happy to announce that my plan has already begun to come to fruition. 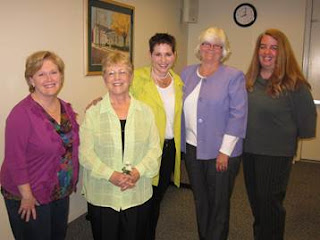 On January 12, I entered an essay in the Erma Bombeck Writing Competition.

On March 1, I received a call from Debe Dockins of the Centerville Library in Ohio informing me I'd won first place in the Global Humor Category.

This photo was taken at the April 18 Erma Celebration. 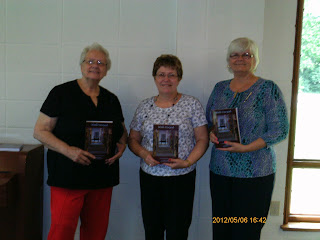 Back to my 2012 Goals: On January 15, I submitted two nonfiction pieces to the Columbia Chapter of the Missouri Writers' Guild Well Versed Anthology Contest. In March, I received notification that I'd won first place and an honorable mention in the nonfiction category of the contest.

The photo on the left is Judy Stock, president of the Columbia Chapter of the Missouri Writers' Guild; Linda Fisher, editor of Well Versed 2012; and Donna Volkenannt (me), first place winner in the nonfiction category.

During the launch, more than a dozen readers shared their poems, essays, and short stories with those present. The afternoon flew by, filled with friendship and food and fun. 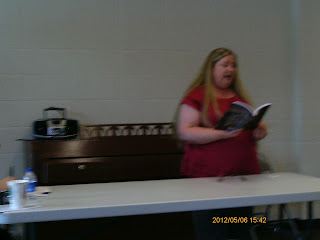 Lou Turner and Marcia Gaye drove to Columbia with me. Two of Marcia's poems won in the poetry category, and she had a total of four poems included in the anthology.

Here's Marcia reading one of her poems.

Critique buddy Alice Muschany also won two prizes in the nonfiction category, both of her essays are included in the anthology. Alice couldn't make the trip to Columbia, but I was able to pick up her certificates and prize money.

I hope this post and these photos can inspire some of my blogging buddies to write, submit, and enter more.

Who knows? The story, essay, or poem you are writing today could blossom into a beautiful flower later this year.
at May 14, 2012