Kindred Spirits Dine at the Boathouse in Forest Park 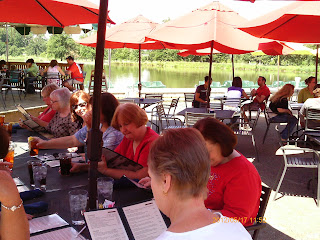 Yesterday I enjoyed lunch and conversation with a dozen women who belong to a group called "Kindred Spirits."


The group, which keeps growing each time we meet, is led by our creative and organized leader Jan, who managed to shy away yesterday every time I snapped photos--although you can catch a glimpse of her arm and wristwatch the picture above. 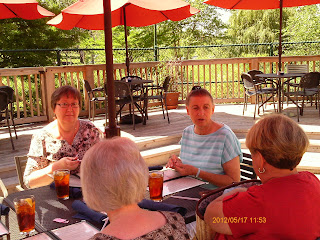 Anyway, the Kindred Spirits get together several times a year at different locations. Last December we roamed the streets of historic Kimswick and ate lunch at the Blue Owl. In February we made the journey to Josephine's Tea Room in Godfrey, Illinois.

Yesterday was a lovely afternoon to be out and about, and it was a good time to catch up on what has been going on in our lives.

As we sat on wooden benches waiting for our table, I watched the young man in charge of boats feeding marbled rye bread to ducks and fish in the pond. He was later joined on the dock by families taking photos and youngsters who delighted in throwing more bread to the ducks and fish 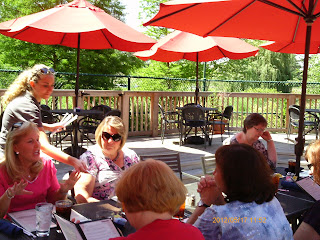 The place was packed with graduates, families, dates, business people, runners dropping by for a quick bite--even folks with their well behaved dogs-- all soaking up the Boathouse's family-friendly atmosphere.

As expected with a large group, it took a good amount of time to get our food, but the server was very attentive and kept our beverage glasses filled. Everyone around me gave good reports about their meals. I ordered the spicy shrimp pizza. The pizza was definitely spicy, but the crust was a bit burnt. I only finished half; next time I'll try something else.

If you've never been to the Boathouse in Forest Park in St. Louis, add it to your list of places to visit, but get there early if plan to eat and want a table outside--especially if you have a large group.

Fun facts about the Boathouse in Forest Park:

* Boating has been available in Forest Park since 1876.
* Because of a 1894 campaign by the Post-Dispatch to raise money for expansion, the lake is called the Post-Dispatch Lake.
* Six thousand men registered to work on the project. (What? No women?)
* After the most recent restoration of Forest Park, the lake has been expanded to include new boating lagoons and an island devoted to wildlife conservation.
* The new Boathouse was designed by St. Louis architect Laurent Torno and is "reminiscent of Midwestern boathouse cottages in the early twentieth century."
* While boating on the lake you can see the Saint Louis Art Museum, St. Louis Zoo, World's Fair Pavilion, Art Hill, Grand Basin and the Government Hill foundation.

The Boathouse is located on 6101 Government Drive in Forest Park.  Summer hours of operation (May-Oct) are:

Paddleboats and rowboats are available for rental for $15.00 per hour.

Thanks, Jan, for planning another awesome adventure!
at May 18, 2012