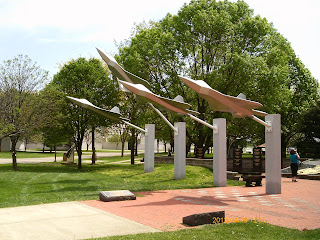 After recovering from our just-in-time arrival for the Erma Bombeck celebration at the Centerville library the previous evening, our first full day in Dayton was exciting.

It was a lovely, early spring Midwestern morning. The weather was mild, the trees and flowers were in bloom, and my sister Kathleen and I were primed for an adventure.

Destination: the Air Force Museum at Wright-Patterson Air Force Base. Doyle, one of my critique group buddies, recommended visiting the museum when he heard I was going to Dayton. Thank you, Doyle. The museum was a delight!

After making a few U-turns, Kathleen and I arrived at the museum.  The day before had been the 70th anniversary celebration of the Jimmy Doolittle Toyko Raid, which we heard was magnificient. Although we missed the hoopola of the previous day, the museum was still abuzz. During our visit we saw replicas of the planes and read posters about the historic event. 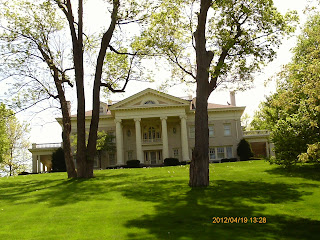 The displays in the museum are quite moving, especially the World War II and the Vietnam War exhibits. Just about everywhere I looked I saw retired Air Force veterans dressed in blazers, all helping visitors. One veteran in the Korean War section made our day when he asked if he could help us and referred to us as "girls."

After leaving the museum, we managed to get lost again, but taking a road less traveled can lead to wonder. Our detour took us through an affluent neighborhood, where I snapped a few photos from my car. The mansion in the photo on the left was just one of the many lovely homes we saw. Fortunately, my camera cooperated that day. I think because the flash wasn't needed.

After returning the to the hotel, we changed before heading downstairs to register for the Erma Bombeck Workshop and Welcome Dinner. Bombeck's widower Bill and children Betsy and Andrew and a few other family and friends were in attendance. During each meal, as part of the celebration, one of the family members read their favorite Erma column. That night, Bill Bombeck's reading of Erma's column about losing her father at a young age moved me to tears.

Alan Zweibel was the special guest after-dinner speaker. An original Saturday Night Live writer. Zweibel was winner of 2006 the Thurber Prize for his novel, The Other Shulman.  In 2010 Zweibel was presented a Lifetime Achievement Award by the Writers Guild of America. Zweibel's newest novel, Lunatics, is co-written with Dave Barry.

During his talk, Zweibel shared memories of his first paid writing jobs and told us how he began his journey to become a comedy writer. In the early 1970s he wrote jokes for comedians who performed at resorts in the Catskill Mountains. If his joke got laughs, he received $7. If not, he was paid a lesser fee.

He also shared how he became close friends with Billy Crystal and Gilda Radner and how he got his start on Saturday Night Live. Zweibel's words about his friendship with Radner and the impact of her illness and passing on him and his family were especially moving.

Zweibel was warm and witty and funny and candid--a perfect speaker to kick off the workshop.