Notes from the Erma Bombeck Workshop - Plot, Character, and Self-Hypnosis

Anyone who knows me knows what a note taker I am. Maybe it's because my first full-time job out of high school was as a clerk-stenographer for the Army then later as a secretary-steno for the Air Force, where I was a transcribing fool. Or maybe it's because I retain more when I write it down.

Any rate I have pages of notes from last month's EB Workshop, and going over them is like reliving my experience.


The first session I attended on Friday was Katrina Kittle's "Which Comes First: Plot or Character?"

Here's some of what I jotted down:

Get to know your character by asking relevant questions (not ones like what's her favorite color)
The point is to get to the character's motivation (her yearning, need, what is she fighting for?)

Make the ending inevitible, but take the reader by surprise

Show motivation right away, but don't state it. Make it clear by actions.
Don't overexplain.

Kittle recommended the book The Heroe's Journey to learn more about structure. 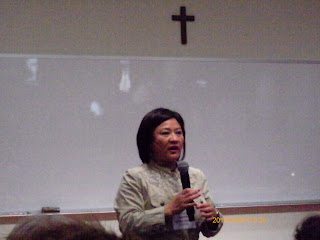 The next session I attended was "Hypnotic Recall fills the Creative Well" with Suzette Martinez Standring (on left).

Martinez Standring is the award-winning author of The Art of Column Writing and the TV host of "It's All Write with Suzette." She also is a formerly certified hypnotherapist who applies guided imagery techniques to writing.

At the beginning of the session she explained that because the conscious mind gets in the way of our creativity, by delving into the subsconcious, writers can be more honest, brave, and authentic in their writing.  Then she took us through a self-hypnosis exercise to tap into our creativity and emerge with vivid, five sensory details to use in our writing.

Some ways she suggested to unleash (no pun intended) creativity are taking the dog on a walk, meditating, daydreaming, listening to music.

Here are some notes I jotted down:
Don't own any negativity that surfaces
Gain from your memories
We remember what we know best
Mine your subconscious
The subconscious won't take you to a place if it's too painful
Surrender and let go; be open and be present in the moment
When an image or thought comes to the surface, ask, Why are you telling me this?
Writing has a healing ability.
Humor has a powerful healing ability (Tragedy over time can lead to humor)
Savor "Holy Ghost" moments when inspiration hits

Suzette's workshop was a powerful experience. While I don't know if I was hypnotized, I felt extremely relaxed. At one point I felt my head droop, but I became alert when someone behind started to cry and the back door in the room opened and closed a few times.

By the end of the session, my sister Kathleen discovered her shoes had fallen off, but she didn't feel them fall. The relexation exercise did work because afterwards I wrote down some vivid images that came to mind.

Question: Have you ever been hypnotized? If so, how was the experience for you?

P.S. In future posts I'll share more of my workshop notes and experiences. Because, note taker that I am, I need to type out my notes somewhere, so it might as well be on my blog.
at May 07, 2012