School's Out and A Whole Lot of Streaking Going On in St. Louis 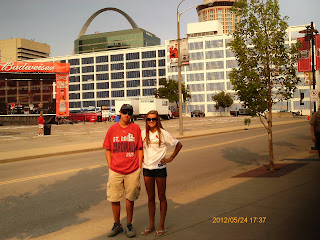 Yesterday was the last day of school for my grandson; my granddaughter's last day was a week ago. To celebrate the beginning of summer vacation, I took the two of them and my granddaughter's boyfriend to watch the St. Louis Cardinals play the Philadelphia Phillies at Busch Stadium. Our tickets were way, way up, on the first-base side, but it was a great night to have a hot time in the city. And I'm not only talking about the temperature, which was in the 90s when we rolled into St. Louis. 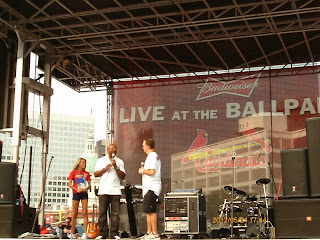 We arrived downtown early to watch batting practice and enjoyed a free concert headlined by a very talented band called Griffin and the Gargoyles. After the band played for awhile we were in for a special treat when legendary Cardinal speedster Vince Coleman spoke to the pre-game crowd outside the stadium.

Coleman was known for his lightning speed streaking around the bases when he played for the Cardinals. During his talk he shared words of wisdom he learned from coach Whitey Herzog, "Give one-hundred-and-ten percent and show up on time."

During batting practice lots of baseballs streaked through the air, and a few landed near where we stood. I did a lot of ducking and covering my head with my purse every time I heard the words, "Heads up!" The Phillies players tossed a few baseballs into the stands, but none were caught by us. Maybe next time.

By the time we found our seats, I was tired. It felt great to sit, and it was a lovely evening. Then the game started. By the end of the first inning the home-town team was behind by four runs, then down six by the end of two innings. They rallied and made the game interesting later on but fell one run short.

The Cards have been hot, almost as hot as the weather, but their winning streak ended last night. And the Cards weren't the only ones who had an end put to their streak on the field. 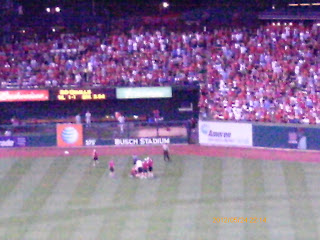 At the beginning of the seventh inning a naked man darted out of the stands onto the field, pursued by the grounds crew and police -- to the surprise and amusement of fans. At first I thought the guy had on a buff colored morph outfit like the blue men group wear, but my granddaughter convinced me the man was naked because she "saw his butt crack."

By the time I dug out my camera, the streaker was down on the ground. A groundskeeper threw a towel around him.

During the excitement I received a call from my sister, who was watching the game on television. She wanted to know what was going on because the TV stations didn't show the guy's romp on the field. I described the scene and told her I snapped a few photos to record the event for -- posterity. After the man was led from the field and no doubt on his way to being arrested, the Ray Stevens' song "The Streak" blared on the stadium intercom.

Anyway, the guy was led off the field in a pair of shorts someone recovered from his entry point. Today's news reported the guy ran naked onto the field because he lost a bet. I'd venture he lost more than that.

Later a helicopter with a spotlight lit up the sky near the stadium. My grandson noticed it first and pointed it out. He wondered if the police were trying to catch someone.  He was right. On this morning's news there was a report about a group of protestors painting graffiti on banks.

I won't describe the romantic encounteer we witnessed as we waited to exit the parking garage, but it was far worse than what went on with the streaker. Was there a full moon last night--or maybe it's the heat?

After sitting in traffic then driving the 30 miles to St. Charles County, it was almost midnight. The kids were more hungry than tired, so we drove through an all-night eatery and the kids polished up some fast food back in our kitchen. By the time I rolled into bed I was exhausted, but our night at the ballpark was a streak of entertainment I'm certain my grandchildren will long remember. I know I surely will.
at May 25, 2012