Writing and Other Marathons 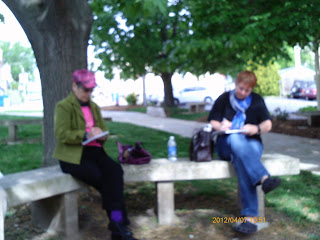 Our group of intrepid writers met around 9 a.m. on the corner of Boone's Lick and First Street near the Trailhead Brewery then proceeded to walk down Main Street.

This was my first writing marathon, so I wasn't sure what to expect, but Sioux Roslowski provided excellent direction and guidance. Sioux (with blue scarf) and Bea Siros (in pink hat) are in the photo on the left. They were dedicated to their task of writing.

I was more in an observational mood and wanted to visually record the event, but sadly, this photo is the only photo that came out unblurry. The batteries on my camera were out of juice, and the other photos I took looked like they were washed in honey.

As we strolled along Main Street, the sights and sounds elevated my mood. Most of the stores hadn't open yet, so the view of the homes and stores was clear. I stopped to read some of the placards on historical buildings, and Spring had definitely made its presence known. The dogwoods, red buds, and tulips were in bloom.

I  ran into a former co-worker opening her shop on Main Street. We chatted about the good old times--not at work--but when her children visited our farm when they were teenagers. We caught up on what we'd been doing lately and how our lives had changed. Mostly we talked about our daughters. She and I lost our daughters in motorcycle accidents, two years apart.

My thoughts turned to wondering about connections--how certain people come into our lives for reasons we might not realize until years later--as we near the finish line of the marathon called our personal histories.

When our group convened for readings, we sat on stone benches alongside the Homestead Store and Grandma's Cookie Shop. The sun made its presence known, crowds of shoppers grew, and chippies scavenged for bits of cookies on the cobblestone sidewalks while we shared our works. The talent of the marathon writers was inspiring.

After our readings, a handful of us stopped in an outdoor cafe called Braden's for Mimosas before visiting the Oil and Vinegar store. I bought a bottle of specialty cooking oil to give to Walt for Easter.

Because of a soccer tournament clear on the other side of the river, I wasn't able to stay for lunch, but I heard later that it was fun and the limericks were a blast. My impression of the writing marathon was that it was both relaxing and exhilirating--an attractive combination of experiences--that I hope to repeat soon.
at April 16, 2012