The second church on our tour was St. John the Apostle and Evangelist, 15 Plaza Square, commonly known as St. John's Downtown. The church, which was built in 1847, was designed by architect Thomas Warring Walsh. At one time, during the 1860s, the church was designated the Cathedral Church of the St. Louis Archdiocese.

During the Civil War, an Irish priest names Father John Bannon, served as pastor of St. John's. Father Bannon was also a prominent chaplain for the Confederate forces as part of the 1st Missouri Brigade. Tragically, Irish immigrants fought against each other in Gettysburg and on other battlefields during the war. At the end of the conflict, clergy on the Confederate side could no longer serve as ministers, so Bannon returned to Ireland. Two flags, one Confederate and one Union, appear in the rear of the church, above the choir loft. Because of their remote location I was unable to get a photo of the flags. 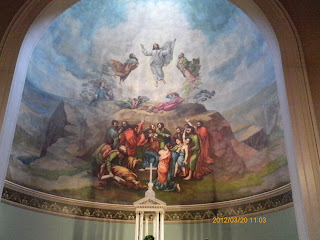 The significance of the church in the Angels and Demons tour can be found in the east apse--a reproduction of Raphael's 1520 painting of The Transfiguration recounted in the Gospel of St. Matthew. The original painting is displayed in the Vatican Museum in Rome. The painting shows demons being exorcised from a young boy. 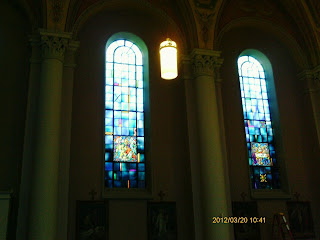 Scenes in the stained glass windows of St. John's Church depict events in the life of Christ recounted in the Gospel of St. John.

The final church on our Angels and Demons Tour, St. Francis Xavier (College) Church on the campus of St. Louis University, is notable for many reasons. One is because of its historical significance, beautiful architecture, and lovely interior, but also because of its connection to a famous exorcism.

In 1949-1950, it was in the rectory of St. Louis University and at the Alexian Brothers Hospital a few miles away, where the exorcism made famous by the William Peter Blatty novel THE EXORCIST actually took place. While the records had been ordered to be sealed by the Church for 50 years, the news of the exorcism leaked out in writing the book. However, significant details were changed in the novel, such as the sex of the child and the location of the exorcism.

In the actual exorcism, the possessed was a teenage boy named "Robbie" (not his actual name) whose family lived in the Washington, D.C. area. Robbie's family was non-Catholic but had a family member living in St. Louis, who contacted a priest from St. Louis University asking for help for the teenager.

During our tour, the docent revealed details about Robbie's exorcism. Robbie was brought to St. Louis and examined by medical professionals before the exorcism was performed -- by three Jesuit priests with assistance from two seminarians. 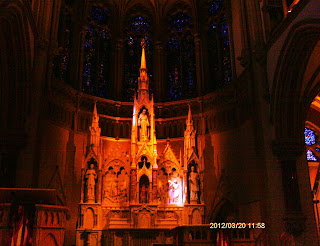 Listening to the true story, goosebumps formed on my arms as I sat in the church, lit only by dim lights and sunlight.  Even with a flash on my camera, the photo I took of the main altar (above) came out dark. I won't go into it here, but suffice it to say that many of the reported details of the possession were chilling, and which I won't repeat them. The church itself was the scene of an other-worldly event at the end of Robbie's exorcism. Walking out of the church into the sunlight that day was a welcome feeling.

Hope you enjoyed my recounting of the Angels and Demons tour. Although parts of the tour were frightening, it was interesting and memorable. I'll save the final, and less unsettling, portion for another time.
at April 11, 2012