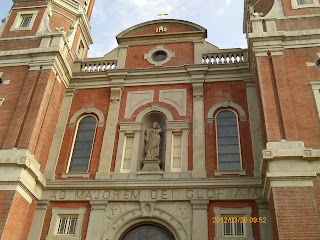 Last month my sister Kathleen and I took a motorcoach tour sponsored by the City of St. Peters, Missouri.

Over the past few years I've gone on several of these around-town tours and have found them educational, entertaining and fun. Tour guide Linda Koenig led the "Angels and Demons" Tour, which took us to several churches, one cemetery, a convent, and a haunted mansion.

After boarding the bus, our tour guide gave us an explanation about the origin of words angel and demon. Angel comes from the Latin word Angelus, meaning messenger of God. Demon comes from the Greek word Daimon, meaning evil spirit.

The first church on our tour was the Shrine of St. Joseph, 1220 North 11th Street in St. Louis (pictured above). Jesuit priests founded the parish in 1843 in an area called Kerry Patch because of the large number of Irish immigrants who settled in St. Louis after the potato famine in Ireland. The land for St. Joseph's was donated by Mrs. Ann Biddle, daughter of one of St. Louis's most generous benefactors, John Mullanphy. Mrs. Biddle, whose husband Thomas was killed in a duel, occupied her time with Catholic charities and other philanthropic endeavors. 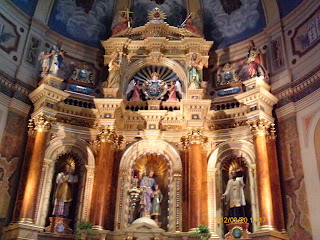 An outbreat of cholera plagued the citizens of St. Louis in the 1860s, and parish priests conducted as many as 20 burials a day from St. Joseph's.

Members of the parish prayed their families would be spared more deaths and asked St. Joseph to intercede on their behalf. Several family members signed a vow that if their prayers and petitions were answered they would erect a monument to honor St. Joseph. According to the parish history, not one family member of those who signed the pledge was stricken with cholera after that.

In thanksgiving, the families erected the St. Joseph's Altar of Answered Prayers (above), which serves as the main altar of the church. The Shrine of St. Joseph is also the site of a miracle healing of Julius Strecker, which involved a blessing with a relic of Peter Claver. The miraculous healing was confirmed by the Vatican.

Other features of the church are the slots where doors once stood on the side of the pews. The doors were shut to help keep the faithful warm in the winter. The pews were also divided lengthwise, which meant double pew rental fees. 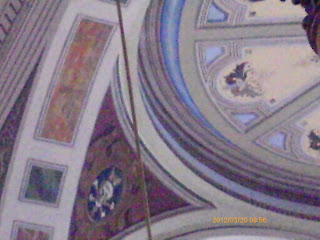 Among the notable features of the church are the symbols of life and death depicted on the ceiling. The skull and crossed bones (in the dark) represent death, while the butterfly above it (in the light) represents rebirth and resurrection.

In the 1980s the church was abandoned and in a deplorable state. A dedicated group of faithful people donated money to save it from ruin. Before they could begin repairing the insides, more than five tons of bird droppings had to be removed from the floors. Now the church is the site of Sunday Masses, special events, and a popular location for wedding ceremonies. The church also has a thrift shop, which serves residents who live nearby. The day we visited we were given bread and fruit left over from their St. Joseph's Day celebration, which was celebrated the day before (on March 19).

In my next post I'll share some of what I learned about another famous St. Louis church, which played a part in the Civil War.
at April 09, 2012