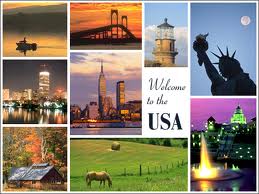 Today marks the 50th anniversary of the day my husband and his mother arrived in America. He was barely a teenager when they left their homeland in the Bavarian state of Germany and traveled across the Atlantic for seven days.
A few days before their departure, Walt hid in a farmer's barn because he didn't want to leave. His mom knew where he was all along, and he reluctantly accompanied her on the voyage to America to join his older sisters who were already here. Walt told me that after he arrived on land he walked sideways for days after being at sea for so long.
Walt's mom spoke no English when they arrived in New York, and he only knew a few curse words he'd learned from the G.I.s stationed near their home. So, after they arrived and a customs officials searched their belongings, Walt couldn't convince the burly agent not to confiscate antiques and collectibles they'd brought with them. The collectibles were from World War II, World War I, and the 100-Year War.
Thus, was Walt's introduction to America. The hope is that the collectibles, including daggers and swords, ended up in museums, but most likely they were sold by the inspector. Later that day Walt and his mom were greeted by his sister and brother-in-law (a Massachusetts policeman), but by then it was too late to track down what happened to the confiscated goods.

What is weird about the timing of this fifty-year anniversary is that last week I received two Facebook friend requests, both from Germany. I didn't recognize the names and started to delete them until I read the messages--one in German and the other in English.

The first was from Walt's nephew who still lives in Bavaria, and whom we hadn't heard from in more than twenty years--when we lived in Germany. Reiner speaks Bavarian, German, English, and French, so he has no problem conversing in English. But, he used a pseudonym and I didn't recognize his Facebook name. The other note was from Rudy, a classmate who wrote in Bavarian to tell Walt about their class reunion next month. My German is rusty and I could make out only a few words, so Walt translated the rest. What's strange is that my husband is not on Facebook, but Reiner and Rudy found him because I use my married name on Facebook.

So, how does all this relate to writing? Here's what I think:

Beginnings -  While staring at a blank page is not as daunting as leaving one's homeland, sailing across an ocean, and starting a new life--starting a new story, essay, poem, or novel is exciting and a bit frightening. Sometimes it takes awhile to convince yourself to get going.

Faith -  Letting go of the familair to take a chance on the unknown takes faith and courage. Who knows what lies ahead?

Setbacks - Not knowing how to respond to someone in power is a helpless feeling.  Writers deal with rejection every day. The best way to handle it is to speak up when you can and do it gracefully.

Connections - Have an online presence. Like the two Bavarians who found Walt through my Facebook page, who knows if an agent or an editor might be searching for you? You might want to use a name people recognize--unless you're tyring to avoid bill collectors or old flames. ;-)
Celebrations - Making a daily word count goal, completing a final revision, winning a contest, or receiving an acceptance are all reasons to celebrate. Let's just hope it doesn't take 50 years!
So, happy anniversary, Walt. I'm so glad you and your mom decided to join your sisters in America and made the trip across the Atlantic fifty years ago!
And good luck to all writers who have the faith and courage to begin, survive the setbacks, make  the connections, and celebrate success.
at April 02, 2012