A Winner and Day Tripping (Part I)

Before I share the fun things I saw and did yesterday on my tour through Osage County, Missouri, I'm going to announce the lucky winner of Mary Horner's Book, Strengthen Your Nonfiction Writing.

The winner, who name was selected at random, is:
Val the Victorian
So, Val if you can drop me an e-mail with your mailing address, I will get Mary's book to you. I'm sorry that everyone who posted a comment couldn't win, but if you want to learn how you can order a copy of Mary's book, visit her WriteRteacheR blog.

Now, on to yesterday's day trip. 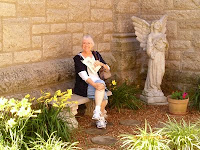 For a few years now my sister Kathleen (in the photo at left) and I have been enjoying biannual day-long tours put on by the Osage County Agritourism Council and local banks. Yesterday's tour was co-sponsored by the Heritage Community Bank in Chamois, MO.
My connection to Osage County began 19 years ago when husband and I bought a "farm" in Osage County. Actually, it's our sometimes weekend getaway--89 acres on the fringe of the Ozarks, with rolling hills, open fields, and deep woods along the Gasconade River, just outside the village of Hope.

Yesterday's tour was probably the best Osage County visit my sister and I have ever been on, and well worth the two-hour drive (one way) from St. Peters to the Osage Community Center in Linn.
The day started off at 4:55 a.m., when Kathleen called to see if my power went out after the storms that rumbled through early, early morning. My power was OK, but hers wasn't. She had to take a shower with only a flashlight to see until the sun came up.Fortunately, by the time I picked her up at 5:45, her power was on, and the sun was up, with the promise of a beautiful day. The drive across the Missouri into the historic City of Hermann was lovely.
After arriving at the community center and getting our name tags, the first person we spoke with was Delores, a 70ish woman who just drove to town after planting beans and corn, which she guessed the river would take by the end of the summer. Delores, whose husband recently passed, got the crops planted late because of all the storms. During much of our trip we heard about the expected flooding of the Missouri, which flows along the northern border of Osage County.
Our first stop was Our Lady of Help Catholic Church, founded in Frankenstein in 1863 by German and Irish settlers. The parish of about 130 families is known for their picnic, with kettle beef and quilt auction, which this year brought in $23,000. The top-selling feed-sack quilt brought in $3,000. The second went for $2,700. The sunbonnet girls tea towels also sold for a good price.
Next, we drove to the Chamois Power Plant, which overlooks the Missouri River. We were told if it rains up North or West along the Missouri, they will get flooded, hopefully not as bad as in 1993. The coal for the power plant comes from Illinois and Wyoming. As research projects in the past they have also used walnut shells mixed with coal and corn cobs. The walnut shells worked, but the corn cobs--not so much. They now have an algae project going on in conjunction with Lincoln University out of Jeff City and Missouri State Science and Technology University out of Rolla. 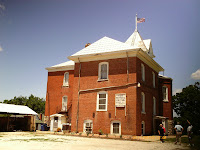 Our next stop in Chamois was at the Old School House on the Hill Bed and Breakfast, where I chatted with Lila Mae and her son Ronald, who live up the road from our place. Our group toured the Old School, which has been converted into a B&B. After the tour, we had a wine tasting, courtesy of Stone Hill Winery in Hermann. Next we were served lunch of barbque pork steaks with all the trimings, topped off by home-made strawberry shortcake. From the hilltop we could see the Calloway County Nuclear Power Plant across the river.
Tomorrow I will post about the remainder of the tour, where we visited Sassafras Valley Farm, featuring Emden Geese, and the tour of Todd and Sharilyn McCane's magnificient Quail Hollow Ranch.
at June 16, 2011