The second leg of the tour my sister Kathleen and I through the Osage County Agritourism Council was educational, entertaining--and downright stunning.

After our delicious barbeque lunch at the Old School on the Hill Bed and Breakfast, which was provided courtesy of Heritage Community Bank in Chamois, we hopped back on the bus and drove down the road to meet the "Chamois Boys," two enterprising young men who have been raising and selling fruit and vegetables since they were lads.

Now college students, the Chamois Boys help their uncles farm 2,000 acres of rich bottomland rear the Missouri River. And, you guessed it, they are worried about flooding. Still, they have their crops planted and are praying for dry weather. Next month they will be selling sweet corn and watermelons at Farmer's Markets and to selected grocery stores, as well as their at their dawn to dusk roadside stand, complete with a money box, where buyers pay for their produce on the honor system. 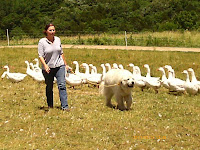 Connie, photo on left, runs the farm with the help of an assistant and three loyal and vigilant Great Pyreneese dogs, which she found through the Missouri Great Pyreneese dog rescue program. To help out during the summer she also has volunteer laborers through the World Wide Opportunities on Organic Farms program. The two college students helping out for a few weeks this summer are from upstate New York. After the "Woofies" leave Missouri, they will work on a ranch in Wyoming then travel to a farm in California to meet up with friends before returning to New York. 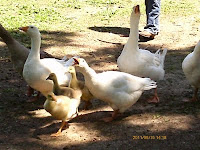 The geese and dogs were amazing to watch. When our group walked to a penned in area to get a look at some of the goslings, Belle, the oldest dog, would have none of it--and neither would the mama geese! We also saw guinea hens--and bamboo shoots growing tall near the house. What an amazing place!

At the conclusion of our tour we were served smoked goose, then we reboarded the tram (provided by Lincoln University and the Missouri Extension Bureau) and headed back to the bus. 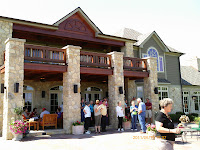 Our final stop on the tour to Quail Hollow Ranch, the home of Todd and Sharyn McCane, was a wowser. The McCanes sold their respective businesses in St. Louis and bought a farm in Osage County. Todd lived on the farmhouse during the three years he oversaw building of the lake, stable, and mansion.

The word Wow! says it all. Just about everyone on the tour kept saying Wow! as we toured the ranch. The 300-acre ranch and stables are tucked away off a winding Osage County road. The photo on the left is a portion of the rear of the McCane's lovely home, which was just completed last fall. The outside is spectacular, but the inside is stunning. 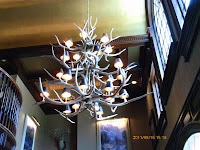 I have never seen such an eclectic collection of antiques and collectibles, except in museums or auction houses. Tiffany lamps, Frederic Remington statues, original collections of Longfellow books, chandeliers imported from Spain, chandeliers made out of deer, moose, and elk antlers, hand-carved wooden fireplaces--the list goes on and on.

After touring the house, we visited the stables, which rival even those at Grant's Farm in St. Louis. Sharyn, an accomplished horsewoman, showed us her four horses before we boarded our motorcoach and waved goodbye.

After we returned to Linn, Kathleen and I headed back to St. Peters, with a stop for supper at the Riverside Diner in historic Hermann, the Gasconade County Seat. At the Riverside Diner we enjoyed a delicious meal of a fresh salad and homemade pasta--Chicken fettucini alfredo--which was rich and delicious. The pasta portion was so large that neither of us could finish even half of it, so guess what I had the next day for lunch?

After such a wonderful day trip through Osage County, I've circled my calendar for October for the fall trip. When can I sign up?
at June 20, 2011