Last night my soon-to-be-18-year-old granddaughter flew home from her vacation in Southern California. She spent a week with her boyfriend and his family to visit his grandparents. It was a huge step to let her fly half-way across the USA without us, but she was in good--and trusted--hands.  Before she left, her boyfriend's mother and I spoke at length about travel plans--and other arrangements--if you know what I mean.

This was her third trip to California. She travelled twice with her parents when she was four then again nine, and she remembered going there as a child. "Everything seemed bigger back then," she said on the drive home fromt he airport last night.

She had exciting stories about swimming in the ocean, watching sunsets, seeing dolphins, shopping on Rodeo drive, and walking across the red carpet when they were stuck on the opposite side of where their rental car was parked.

One day their group of eleven was in Hollywood eating at the Hard Rock Cafe the same day of the premiere for "Total Recall." One of the security guards allowed them to dash across the red carpet before the celebrities arrived. She even spotted a few movie stars. She stood about ten feel from Colin Farrel, one of the stars of "Total Recall," but didn't know who he was until someone in their party told her. 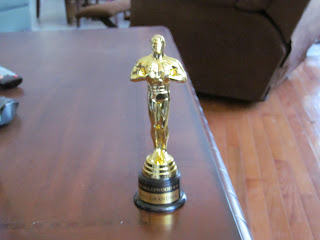 It was fun to welcome her home last night. I made a batch of dirt cake (her favorite) and had cleaned her room, which really made her happy. She brought us each gifts--a Lakers' cup for her brother, a key chain with #1 Grandpa for Walt, and an pen and  a statue for me.

The statue is a gold-plated Oscar with the caption "Best Grandma" across the bottom. That was a lovely surprise, and an award I will cherish.

Shortly before her return, my hubby heard about this cool tool to track airflights in real time. We don't fly often any more, so it was a new toy for us. I used it last night to follow her plane when it left LAX on its way to STL. The tracking tool is Flight Aware.

It's good to have her back safe and sound, home again, and I'm sure she will have memories to last a lifetime.
at August 06, 2012