Yesterday hubby, grandson, and I headed out to Walmart to buy a fishing license for our grandson. (Hubby already has his and I most likely won't be doing much fishing this year.)

I never know what I'll see on a Walmart adventure, and yesterday was no exception.

It was a cool and drizzly day, which is good for the trees and flowers.

But it wasn't so rainy that you'd need an umbrella --- unless maybe you're a car. 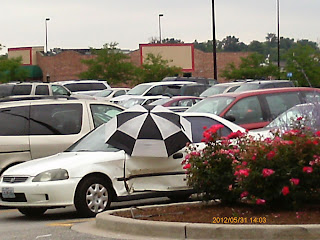 Walking across the parking lot, Hubby said, "Take a look at that."

Of course, I had to grab dig my camera out of my purse to capture the moment on film.

While it may look strange to see an umbrella being used as a car window, on the plus side, the car owner is very creative and the umbrella does match the car -- kind of.

After we left the store, on our way to grab a late lunch, I noticed a souped-up black vehicle, hugging the ground in the next lane. The lime green hubcabs caught my attention.

The teenage driver reved his engine and sped down the road. That's when I spotted something hanging from his back bumper.

Unfortunately I didn't get my camera out of my purse in time to snap a photo of his car as it buzzed past--or maybe it's better that I didn't.

Hanging from his rear bumper was a mesh set of two items resembling the lower anatomy of a bull.

When I asked my husband what that was supposed to mean, he said, "He thinks his piece of junk car has . . ."

So, that leads me to ask, what strange sightings have you witnessed lately?
at June 01, 2012