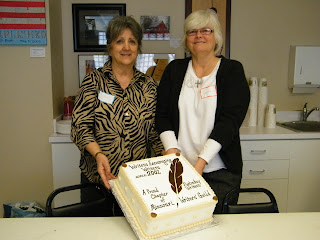 While we're on the topic of celebrations, last Saturday was the 10th anniversary celebration of Saturday Writers, a group I co-founded with Lou Turner, David Kirkland, Margo Dill, and Amy Harke-Moore back in January of 2002.
Our little group grew from a handful of members to now around 80 or 90. Who would've guessed?
Current President Jennifer Hashieder and the SW board did a fabulous job for the event. The cake was scrumptious. The photo on the left is of me with Lou Turner, one of the co-founders. (Note to self: Get a haircut.) Thanks Bea for taking our picture. 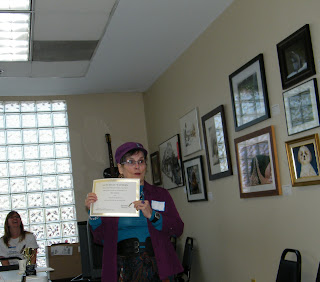 Speaking of Bea. She won second place in the Romance Writing Contest. Other winners were Jack, Sioux, and Jennifer. 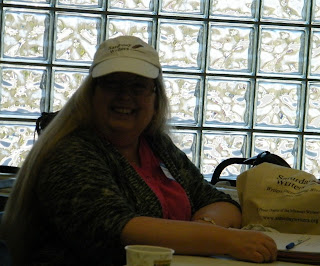 Marcia won a door prize. Here she is displaying her jaunty new cap.
Rebeca does a fabulous job planning these monthly contests. Her idea board is so creative! And Brad's rendedition of "Writer's Block" to the melody of "Yesterday" on Saturday was enormously entertaining--and hilarious. Cyn keeps us all straight when we arrive, and without Les we wouldn't have such delicious goodies each week. And Jennifer is so enthusiastic and creative. She's a wonderful leader!

The group sparkles with energy and ideas, such as Sioux's Writer's Marathon in St. Charles.
Writing, walking, reading, eating lunch and drinking wine. How can you beat that combination on a Saturday afternoon in April?
﻿
﻿
﻿