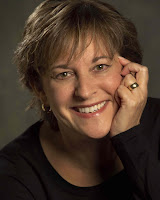 (photo courtesy of Jody Feldman's website)
Today's weather for St. Peters: Mostly sunny, high 35 degrees. Right now it's 19 degrees, but the sun is shining and birds are chirping and flitting among the bushes outside the window.

The Saturday Writers chapter of the Missouri Writers' Guild hosts Jody Feldman, author of THE GOLLYWHOPPER GAMES, at their December 6 meeting.

Jody holds a Bachelor of Journalism degree from the University of Missouri, which has led her to write a television special, a travel book, speeches, all means of advertising, and now - more fulfilling than that giant fortune cookie message she was assigned to create - The Gollywhopper Games (HarperCollins/Greenwillow, 2008), her first children's novel.
*
Targeted to 10-14 year olds, The Gollywhopper Games leads readers through the challenges, puzzles and stunts of a nationally televised, once-in-a-lifetime competition along with the contestant who wants to win it for more than the prize at the end. The Gollywhopper Games has been named the Midwest Booksellers 2008 Choice Awards Honor Book for Children's Literature, is an ALA/YALSA BBYA (Best Books for Young Adults) nominee, is on the 2009-2010 Texas Bluebonnet Award Master list.

Jody lives in St. Louis, Missouri, where she's not supposed to be playing video or computer games until she finishes her next novel.
*
For more info, check her website at http://www.jodyfeldman.com/; and the book's website at http://www.gollywhoppergames.com/.
*
Margo Dill Balinski has done an excellent job getting Jody as a speaker, orchestrating the children's program, and lining up the schedule for this special meeting.
Jody will lead a writing activity and present awards to winners in the children and teen writing contest. Afterwards, members of Saturday Writers will read share literary and culinary treats, and have a gift exchange.
*
Click here to read complete details about the day's festivities and the event schedule http://www.saturdaywriters.org/events.htm
at December 04, 2008