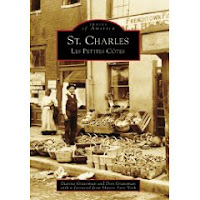 Today's weather in St. Peters: Overcast, 17 degrees. Chance of snow. The kids are home today from school, and they might get another snow day tomorrow.

This week's posts will focus on books. Each day will highlight a different type of book.

Books make great gifts, no matter what time of year, but for Christmas, especially receiving a book as a gift is a treat.

Today will be dedicated to regional books--either written by local writers or books about Missouri or the local region. (All the featured books are available on Amazon.com. They can be previewed and ordered by clicking on the My Favorites link on the the right.)

First up, St. Charles residents, Dianna and Don Graveman's book, St. Charles:: Les Petites Côtes (Images of America) (Paperback), which includes a foreword by Mayor Patti York, is now available for pre-order. The book will be released March 23 by Arcadia Publishing as part of their Images of America series.
*
Here's a description of the Book: "In 1769, French Canadian fur trader Louis Blanchette built a cabin on the Missouri River in what is today St. Charles. He called the settlement Les Petites Côtes, or the little hills. Other now famous explorers soon passed this way, including Meriwether Lewis and William Clark, who began their expedition here in 1804 to explore the Louisiana Purchase territory. Daniel Boone forged a path through St. Charles along the Boone’s Lick Trail, which later joined the Santa Fe Trail and then the Oregon Trail. Today St. Charles hosts many annual events to celebrate its rich history and transport visitors to the past. However, the site of Missouri’s first state capitol has not survived without tragedy and an occasional natural disaster, including a cholera epidemic, tornadoes, floods, and a couple of disastrous railroad bridge accidents. "

*
Rounding out the list is Missouri writer, Sean McLachlan, whose book Missouri: An Illustrated History (Hippocrene Books, Inc.) was included among the St. Louis Post-Dispatch's picks of Best Local and Regional History Books for 2008.

*
Those three are just a few of many books written by regional writers.