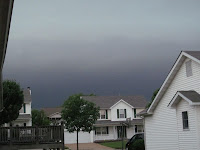 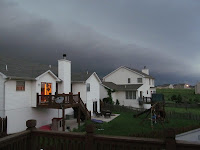 I popped out on the back deck and snapped a few photos before the rain and hail started.

By the time the storm blew over, my neighborhood had received mostly wind damage. This morning while I drove to the store I saw a tree split in half a few blocks away, but about five miles northeast, in St. Charles City, a tornado touched down.

My sister-in-law's brother's roof was blown off and power was knocked out for most of that area. Fortunately, no one in their family was hurt.

Last night my granddaughter was at the movies, and the theater was evacuated until the storm passed. Also last night, the Cardinals baseball game was postponed until today. 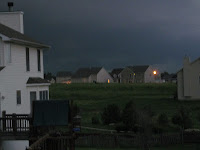 Thunderstorms and tornadoes are a way of life in the spring in "tornado alley," which includes Missouri, Oklahoma, Kansas, Arkansas, Texas, Louisiana, and much of the mid-section of the United States.

When I was 18, our home in St. Ann was damaged by wind when a tornado touched down just blocks away from our street.  Our damage was minor, just some windows blown out in my bedroom. But that was a frightening experience for me, and it instilled in me a respect for storm warnings and made me realize that no matter how powerful we think we are, ultimately we are not in control.

My heart goes out to anyone affected by this latest round of thunderstorms and tornadoes, especially in Missouri and Oklahoma, which was hit once again with deadly storms.
at June 01, 2013