Weekend Events: All Star Tribute to Nick Nixon and the Saturday Writers Workshop

On Sunday October 28 at 1 p.m., local country western entertainers, as well as a couple guest stars from the Grand Old Opry, will show their support during an all star tribute and fundraiser for Nick Nixon at the Stegton Regency Banquet Center, 1450 Wall Street in St. Charles. 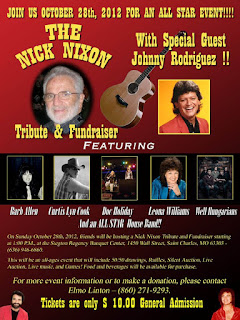 Nick is a legendary local country and western star and a treasured member of our weekly Coffee and Critique group.
In the 1970s Nick had more than a dozen top 100 hits on the Mercury label, including "Rocking in Rosalee's Boat," which climbed to No. 28 on the U.S. Country Charts. The Nick Nixon Tribute and Fundraiser is being held to help support Nick with medical expenses in his battle with Hodgkin's lymphoma.

General admission tickets are only $10 per person and can be purchased at the door. Other highlights include a 50/50 raffle, a silent auction, a live auction, and some special surprizes.

For more information, or to make a donation, e-mail Elmo Linton, who planned and organized the event, at elmojllinton (at) wildblue.net.

I'll be attending the first hour of the fundraiser. Hope to see you there! 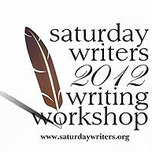 The second event is the annual workshop put on by Saturday Writers.

Jennifer Hasheider and her board have done a top-notch job planning the workshop, silent auction, and lunch, which will be held Saturday October 27 from 9 a.m. to 3:30 p.m. at the Cultural Arts Center in St. Peters City Hall.

Kristina Blank Makansi, co-founder, editor and publisher of Blank Slate Press, who will discuss the dos and don’ts of pitching to agents and editors.

Linda O'Connell will talk about the ABCs of writing authentic, brave, creative nonfiction from the basics to the ethics of sharing your life story.

A few months ago I heard Linda speak about writing at a St. Louis Writers Guild meeting, where she provided helpful information and welcome inspiration.


Due to family commitments I can't make this year's workshop, but if you live in the local metro-St. Louis area I hope you can! Click here for details.
at October 25, 2012