Happy Birthday, Michael! What a Weekend! 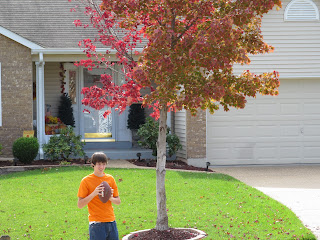 Last weekend is a blur.
Friday night Michael had some friends over for his birthday, which was on Saturday. The plan was mini-golf, pizza, cookie cake, a movie and a video game marathon. Well, the weather didn't cooperate for the mini-golf, but everything else was great.
For his birthday, Walt got him some hunting gear and an air-soft rifle. Cari and I got him clothes, most of which he wanted to wear right away. In these photos, he's wearing one of the shirts Cari got him and the jeans I bought for him. 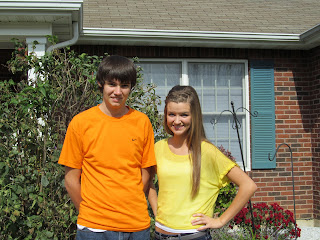 Saturday afternoon he had a soccer game--we won't talk about the times he got called for fouls when smaller kids ran into him and fell down.
After the game Cari and Brendan (her boyfriend) took him and a friend to Six Flags. Another late night.
Then on Sunday afternoon he, Cari, and Brendan went to a pumpkin patch with the O'Donnell family. 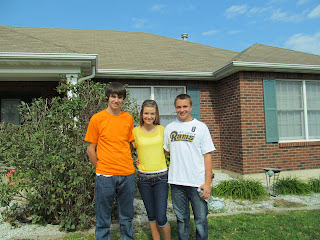 These photos are of them getting ready to leave. Afterwards there was pizza and ice cream cake at his Aunt Jena Dee's and even more presents, including fireworks, money, candy, and more clothes. And my sister and brother-in-law dropped off another present with money, a sports shirt, and two of his favorite treats--Shockers and Cheeze-Its.  Last night he counted his birthday money and rounded up all his snacks. What a haul!

This morning the principal from his school called to say that when Michael did the morning announcements he was so excited, he told her all about his weekend. (Michael is not one usually to chat with teachers.)
Because of his birthday, he got a dress down pass, which means he didn't have to wear his school uniform today. He wore a pair of his new jeans and a new Cardinal shirt, plus he took in treats to share with his classmates.
His principal told me she just had to call and let me know how excited and happy he was about his birthday weekend. How sweet was that?
So happy birthday, Michael. Hope you have another great year!