Notes from the Bleachers: How Watching My Grandchildren's Sports Inspires my Writing 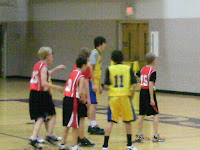 ﻿﻿﻿﻿﻿﻿﻿﻿﻿﻿﻿﻿﻿﻿﻿The weekends are always busy at our home. This past weekend was no exception. On Saturday, my grandson had a 6 p.m. basketball game, and my granddaughter had a 9:30 p.m. indoor soccer game.
We drove about 30 miles from St. Charles County up north to our grandson's 7th grade basketball game in Lincoln County.
﻿﻿Michael is the tall one on the left wearing the All Saints gold and blue uniform. He's easy to pick out in a crowd--as his pediatrician puts it: if Michael were in a room with 10,000 boys all born on his birthdate, he would be taller than 9,985 of them--and he's still growing, with his expected height to be 6'4" or possibly taller. 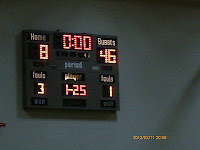 ﻿When the other team scored their first basket during the third quarter, parents and fans from both teams cheered and continued to cheer whenever they scored. Even though the boys on the other team must've known they couldn't overcome such a huge lead, true to their school's name (Sacred Heart) they had heart. Their boys did not give up. Neither did ours. They were gracious winners, in spite of the lopsided 46-8 win.
﻿My granddaughter's late-night game was a different story. Cari's team was behind 2-0 near the end of the game then scored their first goal. With less than ten seconds left they scored their second goal and tied 2-2. Her team didn't give up either and were determined to press on. They changed their strategy and switched players. Her team didn't win, but they tied the game in the last few seconds.

What watching my grandchildren's games taught me about writing is: never give up and work hard until the last word is written on the page--oh, and keep revising until I get it right. Even when I get a rejection, it doesn't mean to stop writing. And when something isn't working, I need to try something different. Whether you passion is sports or writing, never give up.
Guess I better get busy and get back to writing; Cari has another soccer game later this evening that I don't want to miss.
at February 13, 2012