Lights, Camera, Action!
For all you local filmmakers, here's an e-mail I recently received announcing a juried filmmaking competition: 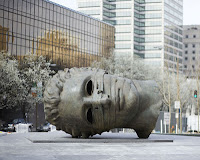 The second edition of Cinema at Citygarden - a co-presentation of Cinema St. Louis (CSL) and Gateway Foundation - invites St. Louis-area filmmakers to let their imaginations blossom by creating short works that incorporate Nature as a key element.

Cinema at Citygarden (on left)

This juried competition will award cash prizes - $1,500 for first place, $1,000 for second place, and $500 for third place - to the top three entries. The winning shorts will then be featured as part of a looped program that will screen on Citygarden's video wall starting May 25, 2012. In addition to the three cash-prize winners, up to seven other works will be chosen to be part of the video-wall program this summer. For programming listings, please visit www.citygardenstl.org.

A three-person jury comprising a filmmaker, film scholar, and film critic will select the video-wall program, including both the three cash-prize winners and the additional films. Jury members will be announced on CSL's Web site.

Cinema St. Louis will also screen the video-wall program - as well as additional Cinema at Citygarden competition entries chosen by CSL - as part of the St. Louis Filmmakers Showcase, held in August 2012. Those films will then be eligible for consideration by the St. Louis International Film Festival, held Nov. 8-18, 2012.

The cash-prize winners and additional works in the video-wall program will be announced on Friday, May 25, 2012. No entry fee is required. Submission deadline is April 2, 2012. For full competition details and a downloadable call-for-entries form, visit the CSL Web site: www.cinemastlouis.org.

For more information about Cinema at Citygarden, contact Cinema St. Louis at 314-289-4150 or visit http://www.cinemastlouis.org/.