Our trip to Memphis this weekend for Cari's soccer tournament was an adventure. Saturday morning a group of six of us hurried from our hotel to Beale Street and hunted for the Peabody Hotel. 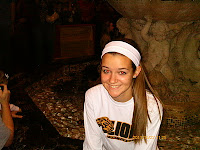 With the clock ticking for the 11 a.m. duck show, we hurried from the parking lot and made a left and found what we thought was the Peabody. We dashed up about twenty concrete steps then found out it was not an entrance to the Peabody.  We should've taken a right.
After jogging back down the steps we found the entrance to the hotel and saw a mass of people crowded around a large fountain.  The famous Peabody ducks had already made their appearance, but at least the girls got to see them swim in the fountain.
Next we headed for the Memphis Redbirds baseball stadium, where we were surprised we were able to enter. On our way inside we encountered a self-described "unofficial City of Memphis greeter." He said, "I'm not begging for money. I just want to point out some of our city landmarks."

He trailed behind us and told us how the Chicago White Sox play in the stadium. That's when we got our first hint he wasn't realy a city greeter and was, in fact, trying to get some money out of us. 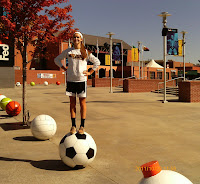 After losing our city ambassador and visiting the stadium, we trekked to the FedEx Forum. The rows of colorful balls (and one fishing bobber) outside were whimsical.
Surprisingly, the sidewalk and street were almost deserted, so it gave me a great opportunity to take lots of photos. Arriving before noon must be the right time to avoid crowds.
After leaving there we headed for the main attraction, the blues and barbeque area center of Memphis, on Beale Street. 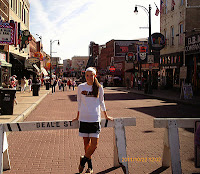 The few cars we saw driving around were memorable: a souped-up red Mustang driven by our friendly "unofficial Memphis greeter," a blue Bentley, an Audi, and a BMW to name a few.  We also saw a street performer who did about a dozen back flips down the brick street, accompanied by a partner who passed around a plastic jar for tips.
All-in-all it was fun, and a memorable way to spend a Saturday morning before the soccer tournament.
One of the highlights of the evening was getting updated about the Cardinals victory during the last soccer match Saturday night.
After the match a group of us drove around looking for a restaurant. Driving around Memphis is an adventure. While the locals are known for their Southern hospitality, it apparently doesn't extend to their driving.  After witnessing a few near wrecks and watching emergency vehicles at the scene of a car wrapped around a telephone pole, we drove even more cautiously.  Eventually we found a Steak n Shake, where we saw an Elvis impersonator and a man whose face was covered with tattoos.
Sunday it rained before the soccer match then let up for a bit, although the sun never did make an appearance. On the drive home, Cari remarked that Saturday morning was a lot of fun. The rain let up for the drive home. As we drove north on I-55, I noticed the cotton fields of Northern Arkansas and Southeast Missouri made the ground look snow-covered. It was quite a sight.
Our trip to Memphis was lots of fun, and a weekend of special memories.
at October 25, 2011