To Market, To Market

Bright and early last Thursday morning my sister Kathleen and I drove to meet a tour bus and spent the day touring "St. Louis Treasures." Despite the 100+ temperature, our trip was very cool!

Tour guide Linda Koenig was a wealth of information--and a treasure herself.

Our first destination was Soulard Market, but before we arrived there, we saw quite a few sights while on the bus. We passed the Anheuser-Busch Brewery, which is 100 city blocks long. We even spotted a couple Clysdales grazing behind the AB fence. When Linda asked us what country the Clysdales were originally from, she got several answers. My guess was Lichtenstein. The correct answer: Scotland.

Driving down South Grand we saw Tower Grove Park and learned about the large Bosnian population (estimated at 70,000) that has settled in the area. 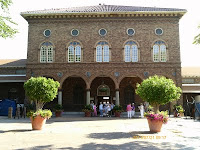 The entrance to Soulard Market in South St. Louis (on left) was bright and decorated with lovely summer flowers. Soulard Market is the oldest continuous farmers' market west of the Mississippi. While many of the stalls were empty, several were just unloading their trucks and we managed to make some purchases. 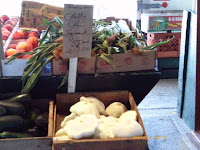 I bought some home-grown tomatoes from a farmer from Southern Illinois. At another booth I bought a patty pan squash. It had such an interesting shape I had to buy it! When I asked the man selling the vegetables how to prepare it, he wasn't quite sure. His English wasn't the best, so I decided to buy it anyway and do an Internet search for cooking ideas. If anyone knows how to prepare it, please let me know. 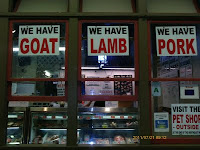 I passed up the bargains at the butcher shop (on the left) where you could buy goats, lamb, pickled pigs feet, and other unusual meats. The sign at the bottom about the Pet Shop out back got me curious--and cautious.
But I couldn't pass up the Spice Shop. Just walking inside was an adventure. Kathleen bought a spinach and cheese spice mix to use for a dish for Bunco, and I bought some spices for my husband Walt--who loves to cook.

If you're ever in St. Louis, check out Soulard Market for an some delicious sights, sounds, smells and--when you get home--tastes. Be sure to check out the dates and times before you go because it's not open every day.

Next week I'll post about some of the other cool places we visited on "St. Louis Treasures Tour" on the hottest day of the year.
at July 23, 2011