Before I write about the tour I took last week, I want to wish my late mother a happy birthday. Katherine Mae Ledford was born in Hannibal , Missouri, the first child of Willie and Minerva Blanche. Mom was born on the same date (Jul 25) as her dad and her paternal grandmother, Katherine, whom she was named after. Mom's family moved to St. Louis when she was an infant. Lucky for me, because that's where she met my dad.

It seems fitting that on my mom's birthday I'm back with more about the "St. Louis Treasures" tour I took last week with my sister Kathleen because--like my mom and dad and family--the City of St. Louis, where I was born and lived until high school graduation, had an influence on the person I am now. 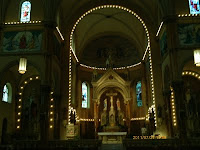 So, back to the tour. After leaving Soulard Market our second stop was the lovely St. Anthony of Padua Church on Meramec Street. St. Anthony's is "the Mother church of the Franciscan Province of the Sacred Heart" and a cornerstone for the changing neighborhood in South St. Louis. The photo on the left does not do the magnificient church justice.

Our host at St. Anthony's was Mike Mount, who is a treasure trove of information. Mike reminded us that according to legend, St. Anthony is the patron saint of lost objects. 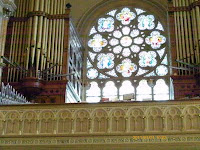 The original St. Anthony's was built in 1863 to serve German immigrants. The current church was begun in 1906 in the Romanesque style, and the cornerstone was laid in 1908. The church was consecrated in 1919 because as Mike told us a consecrated church has to be paid off--it cost $175,000 to build, which was a considerable sum--even back then. The Masses were in German until World War I.

Because of its beautiful design and long aisle, St. Anthony's is used for many weddings. The pews and confessionals are made of oak and the floors are white maple and terazzo tile. Emil Frei designed the 56 stained glass windows. One interesting facet of the church is the "friar's choir," which is off to the side of the main altar. It's a serene room where the brothers say their prayers.

A fire in April 1994 destroyed the roof of the church, and water damage from putting out the fire destroyed much of the wood in the church. The then archbishop of St. Louis Justin Rigali promised to have the church restored to its original splendor, which it has been at a cost of six-million dollars. The church is open daily until 2 p.m.

Leaving St. Anthony's I was amazed at the wealth of information Mike had, not only about St. Anthony's Church, but about architecture, stained glass, St. Louis and Church history, the Franciscans, church legends, and Catholic saints and icons. Mike should write a book--seriously--he has so much fascinating information to share and his passion about what he does shines through.

Although I was born and raised in St. Louis, learning about the city of my birth is an enriching experience, and reminds me I'm never too old to learn. As a writer, trips like these fascinate me because seeing new places or visiting familiar ones engages my mind, keeps me curious and gets my writing juices flowing.

In my next post I'll share the secret behind the green lamps on the tables at Hannegan's on the Landing.
at July 25, 2011