As a writer, I find architecture, history and historic landmarks fascinating. Maybe that's why day trips like the one I took last week are so exciting that I have to share what I learned.

Our lunch stop was Hannegan's Restaurant on Lacede's Landing, at the foot of the Mississippi River, not far from the Gateway Arch. The Landing was settled in 1784 by Pierre Laclede, one of the founders of St. Louis. Linda, our tour guide, told us that a huge fire in 1849 claimed the buildings on the Landing, except for the Old Cathedral and the Courthouse (where the Dred Scott Decision was rendered.)

Hannegan's is housed in the old Witte Hardware building. It sits across the street from the original Boatman's Bank, which was formed for riverboat workers to deposit their money before the spent it all on food, drink, and carousing the streets near the river.

Robert Hannegan was a Missouri Democrat who delivered over 30,000 votes for FDR in the 1940 Presidential election. He was later appointed Postmaster General, and he convinced FDR to recruit then Missouri Senator Harry S. Truman to become his Vice Presidential his running mate in 1948.

The inside of Hannegan's is a replica of the U.S. Senate Dining Room in Washington, D.C. On each table, a brass plate sits at the foot of the green-shaded lamps. Etched on the brass plates are the names of senators and the states they represent. The significance of the names of the senators is that they are the senators who voted to repeal Prohibition. 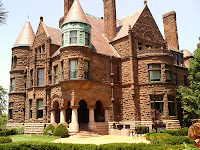 Our next stop was the magnificient Historic Samuel Cupples House on the campus of St. Louis University. Commissioned in 1888 and designed by architect Thomas Annan, the Cupples House is a lovely example of the Romanesque Revival style, build out of purple Colorado sandstone, complete with gargoyles. 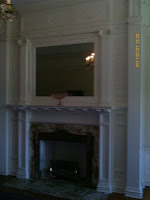 The mansion has 42 rooms and 22 fireplaces, stained glass windows and intricately carved woodwork. My photos don't do justice to the exquisite interior of the mansion. I was so wrapped up in looking at all the antique furniture, sculptures, works of art and the glass collection, I almost forgot to take photos.
Many of the paintings, including a pair of paintings by 18th century Dutch Rocco master Jacob de Wit, were brought to St. Louis in 1845 by Jesuit priest Pierre DeSmet. The glass collection includes works by Suteben, Tiffany, and Lalique in the art noveau and art deco style. 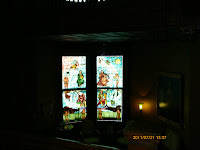 The Zodiac windows (on the left) feature stanzas by St. Louis poet Eugene Fields.
The story of Samuel Cupples is intriguing. He was a self-made man of wealth, yet his personal life was filled with tragedy. His first wife died in childbirth, and his second wife (his first wife's sister) bore three children who died before the age seven.
His home was bought by St. Louis University in 1946, and was headed for the wrecking ball in the 1960s until Jesuit priest Father Maurice McNamee became the champion for its rescue.

The Historic Samuel Cupples House is located in the West Pine Mall on the campus of SLU in Midtown St. Louis. I plan to make a return visit. Who knows--perhaps I can work some of the history of Laclede's Landing or the Cupples House into a story--maybe a mystery even.
at July 27, 2011