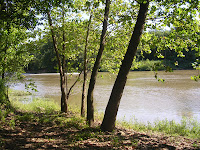 Over the weekend, while I was at the Missouri Writers' Guild "Just Write" Conference (more about that later this week), my hubby and our grandson spent the weekend at our country place in Osage County.

The weekend had near record-breaking temperatures, so Walt and Michael--along with Harley our black lab--took advantage of the warm weather. The guys cut grass, plowed fields, rode four-wheelers, and explored. 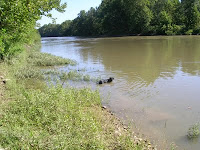 Harley ran alongside wherever they went and even took a swim in the Gasconade River, which abuts our property for about a third of a mile.

I took these photos along the riverbank last summer.

While Michael was out exploring, he spotted something poking out of the earth not far from the riverbank. At first he tought they were bleached rocks, but he noticed they were shaped weird. After he dug them out, he saw they were large bones.

Walt confirmed they are bones, probably very old ones, but too big to be deer bones. He thinks they might be remains from a cow, horse, or mule--back from when our "farm" was actually a working farm, decades ago.

When Michael showed me his find last night, his eyes widened, and he held them almost reverently. He asked what kind of bones I thought they are. Not having a clue, I suggested he put them in a bag and take them to school and ask his science teacher.

On the topic of discovery, and in a stroke of coincidence, I received the Woman's Day newsletter today. Low and behold one of the featured articles contained stories about amazing metal detector findings. The stories are fascinating, but the one I will be sure and show Michael is the story about the seven-year-old Virginia boy who unearthed part of a Civil War sword last year.
So, while we await the opinion of Michael's science teacher about the bones, my question is: Have you ever discovered anything mysterious or found something you treasure?
at April 11, 2011