Dred Scott's Revenge and the Dedication of Hariett's Hill

Sorry I haven't posted for a few days. Really, I'm not a slacker. We all celebrated Cari's eighth-grade graduation dinner/Mass last night, and it's been busy (in a fun and uplifting way) around the Volkenannt/O'Donnell household. 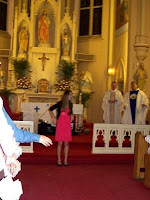 Last night was a bittersweet occasion. At the graduation Mass, when Cari performed as part of the liturgical movement dancers, I thought about how proud our daughter Julie and son-in-law Mike would be to see what a lovely young lady their beloved daughter Cari has become.
I had no doubt they were looking down from heaven smiling at us all--probably in part because they know we now officially have a high schooler on our hands. Yikes! And in four years, we get to do it again when Michael graduates eighth-grade. Life is good and God is great! 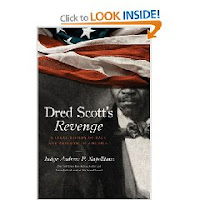 Now, on to book notes: Recently I read Dred Scott's Revenge, an in-depth book about the legal history of race and freedom in America. The book was written by Judge Andrew P. Napolitano and published by Thomas Nelson.
Most likely you recognize the name Dred Scott from the infamous court decision or the term getting off "Scot free. " If you're from Missouri, especially the St. Louis area, you learned about the Dred Scott case as part of Missouri History. Not our finest moment.
The judge's name might be familiar if you watch the Fox News Chanel, where Napolitano is Senior Judicial Analyst.
Using the Dred Scott case -- which was first decided at the Old Courthouse in St. Louis -- as a centerpiece for his book, Napolitano chronicles how the laws of the United States and the policies of our leaders created the deep-seeded racial tensions our nation has endured for centuries. From the Missouri Compromise, to the Civil War, Jim Crow Laws, Civil Rights Legislation, even sports, Napolitiano makes a compelling case for how our national leaders, including Thomas Jefferson and Abraham Lincoln, bear responsibility.
Napolitano also draws comparisons between Dred Scott v. Sanford, which declared slaves as non-persons, to U.S. v Korematsu, which denied rights to Japenese-Americans, and Roe v. Wade, which declared babies in the womb as non-persons. I recommend Dred Scott's Revenge to anyone interested in American history and race relations. It's a compelling read.
On a related topic, I recently received a press release about the dedication of Harriet’s Hill, in memory of Harriet Scott, Dred Scott’s Wife and co-plaintiff in the infamous Dred Scott case. The ceremony was held yesterday at Greenwood Cemetery in St. Louis. The May 26th event was sponsored by the Dred Scott Heritage Foundation and the Friends of Greenwood Cemetery Association. For years, it was assumed that Harriet was buried next to Dred Scott at Calvary Cemetery in St. Louis, but in 2006, researchers discovered Harriet was buried in Greenwood Cemetery, the burial site of as many as 50,000 African-Americans.
at May 27, 2009