Early-bird registration (by Sep 26) is only $35 for CCMWG members and $40 for non-members.

Keynote speaker Terry Allen will talk about "Writing Dialogue" and "Writing in Shadows and Fog." Dr. Allen is Professor Emeritus of Theatre Arts from the University of Wisconsin – Eau Claire who taught courses in playwriting, directing, acting, stage movement, theatre history, theatre of the Holocaust, and American cinema for thirty-four years.

Mary Horner: "Write like a pro to sell your nonfiction writing." Mary is the author of Strengthen Your Nonfiction Writing, a guide to help you write like a professional. She teaches communications at St. Louis and St. Charles Community Colleges.

Linda Rodriguez: "Riding the Tiger: Writing and Publishing Novels with a Big Five Publisher in a Chaotic Time of Transition."  Linda Rodriguez’s third Skeet Bannion novel, Every Hidden Fear (St. Martin’s/Minotaur), will be published May 5, 2014.

Mary-Lane Kamberg: “What’s So Funny?” Put your sense of humor on paper. Her workshop includes practical advice for using humor in poetry and following the narrative form for humorous essays. Mary is a professional writer with more than twenty years’ experience. She is the author of 27 books. Her articles have appeared in Better Homes and Gardens, Marriage and Family Living, Christian Science Monitor, Healthy Kids and many others.

Gerado Mena:  "Unleashing your Inner Voice." His workshop includes generating material, sifting, and creating poems using modern structural techniques. War Poetry: (Closing Session) Iraq.  In this workshop he will read from his poetry book The Shape of Our Faces No Longer Matters and will share his journey from a head full of bad memories to a book of war poems. Gerardo Mena is a decorated Iraqi Freedom veteran. He spent six years in Spec Ops with the Reconnaissance Marines and was awarded a Navy Achievement Medal with a V for Valor for multiple acts of bravery.  His poetry and essays have appeared in The New York Times, Ploughshares, Best New Poets 2011, Ninth Letter, and elsewhere.

When I started this blog, my purpose was to post about writing, books, publishing, and life’s sweet mysteries – and to avoid politics and divisive or controversial topics.

But the recent events in Ferguson, Missouri – just twenty miles away from my home – are impossible to ignore.

However, rather than commenting on the heartbreaking situation and disturbing images coming out of Ferguson, I’ve decided to post some beautiful images that can be found in my beloved home state of Missouri.

Earlier this summer, my sister Kathleen and I took a day trip through Osage County. Our tour was called “Gospels in Glass,” which included traveling to several churches in Osage County -- and one across the county line in Maries County.

Our on-the-bus tour guides were Ken Luebbering and Robyn Burnett, whose guide book, “Gospels in Glass: Stained Glass Windows in Missouri Churches,” published by Pebbles Publishing, was included in our tour price. Pebbles Publishing, a small press located in Rocheport, specializes in books about Missouri heritage, travel and adventure.

The 144-page Gospels in Glass depicts stained glass windows in churches and synagogues throughout Missouri—from Cape Girardeau to St. Joseph; St. Louis to Kansas City; and St. Patrick to Carthage.

During our trip, we got a sampling of the many artistic displays in the book, as well others not found in the book. We also learned about the rich history of German settlements in Missouri; Ken and Robyn also wrote German Settlement in Missouri: New Land, Old Ways (University of Missouri Press).

We learned about iconography and symbolism, techniques for creating stained glass, snippets of information about the artists, and some history of the Emil Frei Company in St. Louis, which is known nationally and internationally for its stained glass craftsmanship.

Churches included in our tour were:

* Sacred Heart Church in Rich Fountain, founded in 1838. The parish’s German and farming heritage was evident by windows of German saints, such as St. Gertrude, the patron saint invoked against rodents.

Standing at the front of the high altar, Ken explained the significance of the Sacrifice of Melchizedek and “Abraham’s Sacrifice” on opposite sides of the altar.

Draped over the wooden pews were the hand-made quilts that were to be auctioned off at the parish picnic.

* St. Joseph in Westphalia, with stained glass windows of many saints, including: St. Hubert, St. Conrad with the spider on his chalice, and St. Herman holding the Christ Child.

We learned about the legend of the pelican and significance of sacrifice in church iconography, not just Catholic, but also Protestant.

* Holy Family in Freeburg, called the “The Cathedral of the Ozarks,” which, we were told by the pastor, is the last church in Missouri with Twin Spires.

The abstract representations of grapes and wheat allowed vibrant light to flow through the windows.

* Visitation Church in Vienna in Maries County, with its less-traditional windows that are technically different from those earlier in the day.Although several of the windows were out for repairs, the ones we saw were lovely.

This is just a small sample of the beautiful images throughout Missouri, although I’m certain if you look, you can find beauty everywhere – not only in churches, stained glass windows, or handmade quilts, but also in nature – and in residents of the Show Me State.

How about you? Where can you find some beautiful images in Missouri?

The proposed anthology titles are:

According to the Harness Anthologies page of RHP website, payment is two contributor copies.
at August 13, 2014 12 comments:

My friend Lou Turner, publisher of High Hill Press, is a huge fan of Westerns -- books and movies.

She tells the story of when she was young she once wrote a fan letter to John Wayne -- and she got an answer. Somehow the letter got lost in one of her moves from Central Illinois to Missouri, but she still has a life-size cutout of "The Duke" in her house.

So, it's no surprise that after she and her husband Bryan started HHP several years ago they decided to publish western novels and anthologies.

Their hard work, dedication, and commitment to the Western genre recently paid off when High Hill Press won a Spur Award from Western Writers of America for the best Western short story, "Cabin Fever," by Brett Cogburn, which appears in Cactus Country III.

HHP was also a finalist for another short story, "Chouteau's Crossing," by McKendrie Long, which appears in the Rough Country anthology.

I took the photo of Lou (above) during one of our weekly critique group sessions. She's holding her spur and a copy of Cactus Country III.

If you are a fan of the western genre, check out the High Hill Press website, where you can find western novels and anthologies published by HHP.

And, if you write about the West, visit HHP for information about submission guidelines.
at August 11, 2014 9 comments:

A Day in the Life of a Book Editor (Part II) 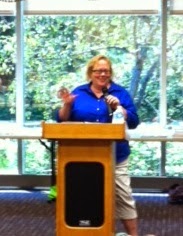 During her visit to Saturday Writers, Jane Henderson answered questions from the audience. She was engaging and thorough when she explained the review selection process and candid and encouraging when she gave tips for local writers and publishers on how and when to submit their books for review.

Here's a summary of what I learned:

* All books, including children’s books, should be sent directly to Jane Henderson at the St. Louis Post-Dispatch.

* You do not need permission to submit a book for review.

* About six weeks ahead of the event/release date, send her a heads up e-mail that you will be submitting a book (galley or ARC) for review consideration.

* No later than four weeks before the release date or event, submit the book (galley or ARC).

* She has to have a physical copy. (I took this to mean no e-books or PDF files.)
* Succinctly summarize (in a couple lines) why Post-Dispatch readers would be interested in the book.

* Describe the local connection, if any.

* Include the date of publication, price of the book, and name of the publisher.

* It’s okay to send one additional follow-up e-mail to make sure the book was received.

* But, sending more than two or three reminders can be counterproductive.

* Jane mentioned that the newspaper uses metrics of online readership to determine which reviews, features, and types of books readers are most interested in reading about. These metrics are used when selecting books for future reviews.

* Here is a selection of newsworthy items that have appeared recently in the PD book section/book blog.

A review of Gravity Box written by local author Mark Tiedemann and published by WalrusPublishing, a local press.

A feature about esteemed local writer William Gass on the occasion of his 90th birthday.

A feature about the October literary festival, Lit in the Lou.

Weekly listings of best-selling books.
Final note:  Jane's talk confirmed my belief that writers can generate interest and get more visibility for books and book reviews by visiting the Post-Dispatch online book section and book blog site regularly. I visit them several times a week to make sure I don’t miss any news about books, publishing, local authors, or special book-related events.