Earlier this month I heard a priest talk about the jubilee "Year of Mercy" declared by Pope Francis. (The logo on the left courtesy of the Pontifical Council for the Promotion of New Evangelization, Vatican State.)

The priest also explained the difference between grace and mercy.

He repeated that line a few times, so I figured it was important. With this post, I’ve written it down to help me remember.


Lately, I’ve been thinking about the times in my life when the words “grace” and “mercy” have made an impression on me.


Whenever I hear the song “Amazing Grace” I get chills. Both the words and music move me, sometime to the verge of tears.


There’s also a saying about grace I remember a neighbor repeat while I was living in Massachusetts in the 1970s. Whenever she saw someone with an obvious impairment or heard about a person’s tragedy or misfortune, she shook her head and said, “There but for the grace of God go I.” Her words about the grace of God have stuck with me, and I’ve repeated them when I’ve encountered similar situations.


My first recollection of using the word “mercy,” is goofing around and wrestling with my siblings when I was a kid. “Mercy” was what we had to say when we admitted defeat to the stronger person.


The word “mercy” also reminds me of high school English class. Every year, the nuns at St. Alphonsus “Rock” High School taught us at least one of William Shakespeare’s plays. One semester, during Sophmore year (I think it was), we were assigned to read “The Merchant of Venice” and had to memorize Portia’s quality of mercy speech. I don’t recall all of the passage, but five decades later, I still remember this much:

The throned monarch better than his crown . . ."


Back then I focused on getting a good grade; since then the words have come to mean more to me, especially the first four lines.


Those are my thoughts on grace and mercy.
What about you? Do you have any favorite quotes, thoughts, or memories about one or both of those words?
at January 16, 2016 12 comments:

Thoughts on Elvis Presley on His Birthday

It's hard to believe Elvis Presley would've been 81 years old tomorrow, January 8th. Elvis, the "King of Rock and Roll," was in his early 40s when he died, but he lives on through his music and memories of him.

My mom was an Elvis fan. Sunday nights we sat around the TV and watched Elvis and other musicians perform on the Ed Sullivan Show. At other times, Mom would turn the radio on and dance around the kitchen to tunes by Elvis, Johnny Mathis, Tony Bennett, and Andy Williams. She also loved Tom Jones.

Two of her glitzy (and, to be honest, ditzy) sisters made several trips to Vegas, where they saw Elvis and other famous entertainers perform then they'd come home and tell Mom about their adventures. Mom could never afford to go with them -- although she was thrilled when my sister Kathleen and I took her, much later in her life, to see Tony Bennett and Andy Williams perform when they visited St. Louis on separate occasions.

Back to Elvis. I wasn't a huge Elvis fan. I liked some of his music, especially "Love Me Tender," "Are You Lonesome Tonight?" and "Blue Suede Shoes" was another good one, but I thought his movies were cheesey. Several friends from our neighborhood Bunco, which has been going strong since 1974, adored "The King" while they were teens and well into adulthood. In fact, a few of them were  upset on Bunco night two days after Elvis died in August of 1977; they were so inconsolable they could barely roll the Bunco dice.

Another Elvis story came from Nick Nixon, a contemporary of Elvis. Nick was a local St. Louis area celebrity, a songwriter, and country singer. Nick discovered late in life that he wanted to write something other than songs, and he became a treasured member of our Coffee and Critique writers' group for several years until he passed away a couple years ago.

Nick once told a story during lunch at C&C of how, while he was in the Marine Corps and stationed in Tennessee, he had a run in with "The King of Rock and Roll." Apparently words were exchanged between Nick and Elvis, a gun was brandished, and an apology from Elvis arrived in the form of a telegram to Nick some time later.

How about you? Care to share any thoughts or memories about Elvis on his birthday?  Or, do you have a favorite Elvis song?
at January 07, 2016 11 comments:

Overused Words and Words that Annoy Me

Back in November I tweeted about the overuse of the word "So," which was frequently used at the beginning of a sentence or during a pause in a conversation. I even admitted I was guilty of overusing the word myself.

So (Ha!), I was pleased this evening when I watched a segment on a TV show that included a tongue-in-cheek list of words and phrases that one university suggested be eliminated from use.

Want to guess the word at the top of a list?  So!

That brings me to another word, the overuse/misuse of which I find annoying. It is a word usually uttered on TV by reporters or law enforcement individuals (hint) being interviewed by reporters.

Ahem. The word I'd like to hear less often is: Individual.

Rather than saying "the individual was apprehended," why not be more specific? Use the word person, man, woman, representative, pet, or criminal, just not "individual." Individual what?

Okay. Your turn. Any words or phrases you find annoying?

Oh, and my second choice for an overused/annoying word is the word: annoying.
at January 05, 2016 18 comments:


Missouri's famous writer Mark Twain once called new year's resolutions "harmless annual institutions of no particular use to anybody."

And, if my past performance can predict my future behavior, I can't argue with his words.

At the beginning of each year, with a heart full of good intentions and a mind focused on success, I map out my resolutions and set what I believe are attainable goals. Then, by mid-year, or even sooner, I lose focus. My good intentions are either forgotten or deliberately ignored.

So, in the spirit of Mark Twain, I'm neither making annual resolutions, which I will not keep, nor will I set goals, which I'll either forget or ignore. I'm going to try something different.

I'm following a suggestion borrowed from Margo Dill's inspiring post on "The Muffin," the Women on Writing blog. In Margo's post, she writes that she is going to focus on one word for 2016. You can find Margo's one word on "The Muffin" blog.

Like Margo, I'm going to focus on one word for the year 2016. My one word applies, not only to my writing, but to every aspect in my life.

My one word is: BELIEVE 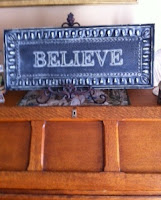 As we turn the calendar page to 2016, I wish you health and happiness, peace and prosperity, and many blessings that you too may believe!
at January 01, 2016 16 comments: