Most of the time, I'm all about words, but sometimes words don't do justice when it comes to describing beautiful works of art.
Perhaps a picture really is worth a thousand words.
So, rather than writing a long post today, I thought I'd share more photos from my recent trip to the Saint Louis Art Museum.
Here are some photos of beautiful creations -- the Edgar Degas "Little Dancer of Fourteen Years," Claude Monet's "Water Lilies," -- and other works of art that stirred my soul.
Enjoy! 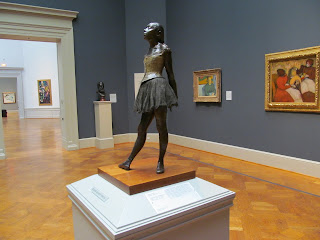 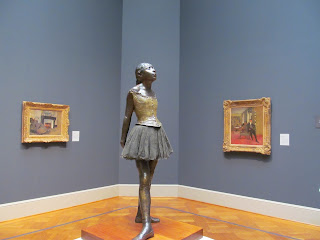 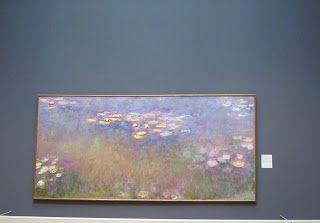 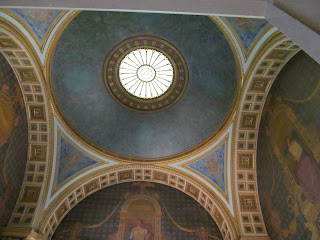 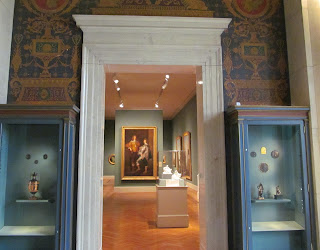 Call for Submissions: Got Ghost?

Rocking Horse Publishing is seeking ghost stories set in Missouri for an anthology that will be published this coming October. The deadline is August 30, so what are you waiting for? Scare up a ghost story.

Here is the call for submissions from their website.

RHP will be releasing a volume of original ghost stories set in Missouri, based on legend or purely fiction, in October 2013! Potential authors must submit, by August 30,  works of 1000-5000 words plus a short, 30-word bio, and must be age 18 older.

Selected authors will receive two copies of the anthology and a one-time royalty of $25.00. Additional copies may be purchased at a 50% discount plus shipping. Books will be available in both print and E-format.

We want good ghost stories, things that go bump in the night, haunted houses - no werewolves, vampires, or fantasy. No erotica, devil worship, or otherwise sexual or offensive themes.

Please follow regular submission guidelines below, but submit manuscripts to rhpanthology@gmail.com.
Thanks to Brad Cook of St. Louis Writers Guild for sharing the link to the submission call-out.﻿
at August 24, 2013 7 comments: 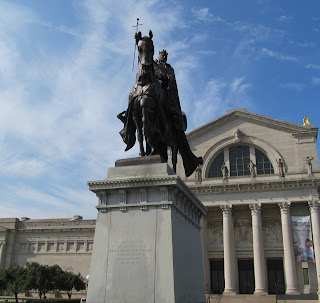 Last week some friends and I visited the recently renovated Saint Louis Art Museum. I hadn't been to the museum in a few years, so I was looking forward to the trip.

For me, the apotheosis of St. Louis (Charles Niehaus, 1903) standing in front of the museum symbolizes St. Louis, even more than the Gateway Arch.

As a child I recall taking field trips to the museum and being amazed at the statue of St. Louis mounted on his horse and holding a huge sword.

The day of my recent visit was unseasonably mild for mid-August. Our group from St. Charles arrived early and got a primo parking place before meeting up with the North County, South County, and Illinois ladies. We were in the first tour group, which began at 10:30 a.m. Barbara, our docent, did an excellent job pointing out noteworthy pieces in the renovated section of the museum, along with some of her favorites. 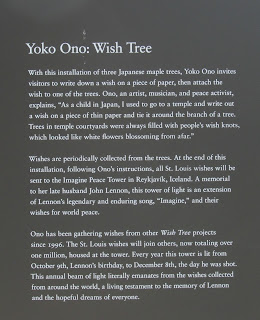 One of the highlights of the tour was our walk-around outside the museum, with a visit to Goldsworthy's Stone Sea and Yoko Ono's Wish Tree for St. Louis.

The St. Louis Wish Tree is actually three Japanese maples. The photo on the left explains the significance of the wish tree to Yoko Ono.

After hearing about the project, we were invited to write our wishes on a tag and tie them to one of the trees. 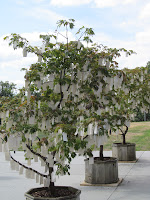 As I searched for just the right spot to tie my tag to a branch, I couldn't help reading a few wishes nearby.

My sister Kathleen spotted a request for a pink bunny. Hmmm. Wonder if that one will come true.

After our guided tour, we separated and did a self-tour before lunch. With limited time I didn't get to take in all of the amazing artwork, but I did get to view several major pieces.

Although I didn't add this to the Japanese maple trees, one of my wishes is to return to the Saint Louis Art Museum soon.

To learn more about the Saint Louis Art Museum and Yoko Ono's Wish Tree, visit their website.
at August 19, 2013 16 comments:

The Importance of Transitions in Writing and in Life

Writers know how important transitions are to make their words flow smoothly so readers can understand what they are trying to communicate and don't get lost. According to the Writing Center at the University of North Carolina at Chapel Hill, "transitions glue our ideas and our essays together."

In my little corner of the world, the past few days have been a time of major transitions. For us, the love of family and the kindness of friends have been the glue that has kept us together. 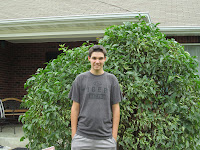 Being a shy kid, the thought of switching from a small Catholic elementary school to a large public high school has been intimidating. On the drive to his new school, he and his best friend from grade school told me how nervous they were.

By the time I picked them up three hours later, they told me how much fun they had and how they can't wait to start their new high school.

During transition day, my grandson met other students, found his way to his locker and classes, had a teacher/coach invite him to try out for a team, and even talked to some girls. His transition day was a big hit!

First-day jitters is the last hurdle he has to overcome: riding the school bus and maneuvering through his first lunch period, but experiencing transition day has made that prospect less daunting. 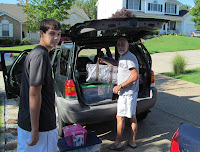 And he isn't the only one making a major change this month.

Yesterday, my granddaughter began her trek to college, where it's Rush Week for coeds interested in Greek Life and thinking about joining a sorority.

After a quick breakfast, my husband and grandson loaded her car and mine. We barely fit her stuff into two cars with room for two of us in each vehicle; I wondered how she would fit everything in her half of the dorm room.

Oops, they're not called dorms anymore; they're called residence halls.

On the 100-mile drive, she and I had a good talk. Mostly, I listened, and we both shed some tears. To keep her eyes dry while she drove, I read out loud a few pages from Start Something that Matters by Blake Mycoskie, creator of the TOMS shoe company. 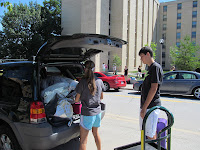 She had already started reading the book but needs to have it finished for a group discussion the first week at school -- and I'm always happy to read and learn, especially if it's something my grandchildren are reading and learning.

Upon arrival, we were directed to park in spots designated for 20-minute unloading. That's when the fun began. The scene was controlled chaos as students and family members unloaded cars, trucks, and vans then waited their turns to check in and haul everything up to their rooms. 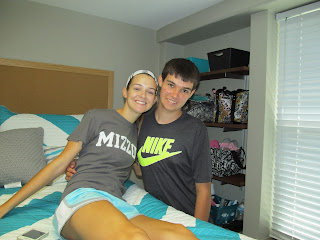 Several hours later, with the help of her grandpa and "little" brother, who did most of the heavy lifting and moving of furniture, she was unpacked and ready to register for Greek Week.

After sharing a late lunch with the family of one of her good friends, we loaded the dolly, the empty suitcases, and the storage containers into my car for the trip home.

By 6 p.m., we said our farewells and shed even more tears as we watched her and her friend head off for their first Greek Life meeting and the beginning of a new chapter in her life.

Loving families, good friends, and smooth transitions; without them, we'd be lost.

Lights, Camera, Action: Chicken Soup for the Soul Headed for the Big Screen

Grab your sunglasses and roll out the red carpet!

According to Newmark's press release, "Alcon Entertainment, the creative studio behind The Blind Side, Dolphin Tale, P.S. I Love You, and many other hits, is set to finance and produce the film, along with The Kerner Entertainment Company and its principal Jordan Kerner, the genius behind The Smurfs 1&2, Charlotte's Web, George of the Jungle, Fried Green Tomatoes, and many others.

"Brandon Camp, who wrote Love Happens, will write the screenplay, which is inspired by our books. Warner Bros will release the film. One of the Executive Producers of the film will be Ben Haber, who executive produced The Smurfs and Across the Universe."

To read more about this exciting project, here's a link to an article in the LA Times.

Now that summer is winding down and my teenage grandchildren will be heading off to school next week, I'm hoping to write more and -- if time permits while working on my novel and preparing for speaking engagements this fall -- submit to writing contests.
Here are announcements from two writing organizations which have sent me their contest guidelines and asked me to share the guidelines with other writers.
Both organizations have categories open to non-members.


The first is Green River Writers. According to their website, Green River Writers is, "a non-profit organization founded in Kentucky in 1984 to support writers through education, promotion and fellowship."
Here is a link to Green River Writer  contest guidelines. The deadline for submissions for the Green River Writers Contests is August 15 August 31. Contest categories are mostly poetry, but there are fiction and non-fiction categories as well.
The second is Springfield Writers' Guild, a chapter of the Missouri Writers' Guild. The deadline for submission to the SWG annual contest is September 15. Here are guidelines for the SWG contests, which has contest categories for poetry, fiction, and non-fiction.
Good luck if you submit!
at August 07, 2013 7 comments: