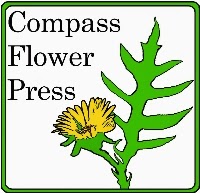 Have you ever wanted to be published in a professional, theme-driven anthology?

Have you ever wanted to win a big prize for your writing?

Here's a chance to do both.

How? AKA Publishing and Compass Flower Press are actively seeking submissions for their Uncertain Promise anthology contest, and they have extended the deadline until June 9.

What are the editors looking for in submissions? Fiction and Creative non-fiction, but not poetry.

How big are the prizes?

What does the theme Uncertain Promise mean?

Here are some examples from the AKA website: an unexpected outcome (joy, satisfaction, renewal, despair, emotional growth, etc.) from an otherwise routine or mundane circumstance. The uncertain promise might be an unspoken commitment from a friend or lover falls through due to misunderstanding or unforeseen happening, a career failure or future crashes--or ascends--depending on the outcome of a single event. These are some of the editor's ideas, but writers are welcome to use their imaginations and interpret the theme broadly.

May I submit something that's already been published? No. Unpublished submissions only.

How about simultaneous submissions? Yes, but please note that on the entry form and give immediate notification if your entry is accepted elsewhere.

How are the entries judged?

Fiction and creative nonfiction submissions are read and evaluated anonymously by two editorial boards. Submission does not guarantee acceptance; acceptances that make the final cut are forwarded to independent judges for possible award of cash prizes.

Each published contributor receives one free copy of the anthology.

How much does it cost to enter?
Non-refundable entry fees ($US) for each category are $18 for electronic submission (paid on website) or $15 for mailed submission (paid by check or on website.) Compass Flower Press and AKA-Publishing are imprints of the independent and self-supporting publisher, AKA:yola, LLC.

How many times may I enter? No limit on submissions, but each entry requires a separate entry fee.

Where is AKA Publishing located?

Where can I find more details? Visit the AKA website for complete details and entry instructions.

What else do I need to know?
All submissions—both snail mail and e-mail—will be notified via e-mail upon receipt.

Prize winners and entries selected for publication will be posted on CompassFlowerPress.com.

Note: As a board member of AKA Publishing, I get to help spread the word about this opportunity to fellow writers.

When Riding a Zip Line Watch Out for the Noodle 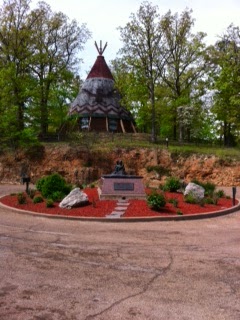 Last Friday, my sister Kathleen and I, along with some of her former co-workers and 50 other brave souls, met bright and early at the YMCA in O'Fallon, MO, for a bus trip to the Trout Lodge at the YMCA of the Ozarks in Potosi, MO.

The day started out great. The early morning weather was sunny and mild with just a hint of clouds. Before we boarded the bus, our hosts at the Y provided fruit juice, bottled water, and brown paper sacks of snacks for our trip.

Due to an accident on the highway, the bus ride took longer than expected, but we enjoyed a movie on the way. 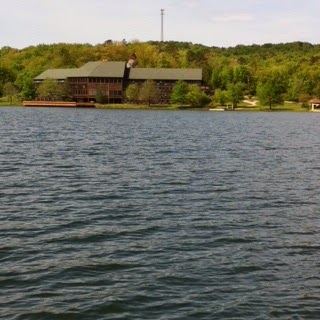 Because of our late arrival, Kathleen and I weren't able to participate in the GEO-caching event that had already begun. In a nutshell, the task involves taking a GPS tracker and making your way through the woods using longitude and latitude markings to find landmarks. Maybe next time.

Instead, we joined some friends for a pontoon ride around the lake. Our pontoon driver/guide was enthusiastic and knowledgeable. She pointed out special features of the lodge, the horse trail ride path, and the location of a pair of eagles' nest. Her passion came through as we rode across the lake.

During lunch, the weather took a turn for nasty, but we were safely inside the glassed-in dining room, with a spectacular view of the lake, as hummingbirds flitted about their feeders and lightning zigzagged across the dark sky. 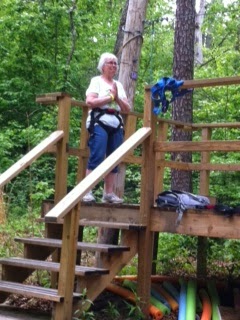 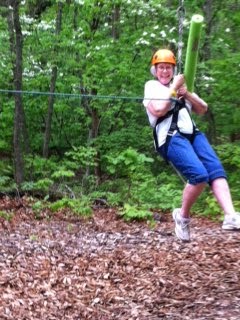 Also during lunch we debated if we should try the zip lines. We decided if it rained we wouldn't do it. By the time we finished eating, the sun reappeared and clouds fluttered away -- so did our excuse.

Our group of ten was last to go, so after walking about half a mile to the launch site, we were able to observe the first group and get some tips before getting harnessed up and ready to soar.

When Kathleen took to the platform I watched for her reaction. For years she's wanted to try zip-riding, but has been talked out of it. But after seeing men and women in the first group in ages ranging from their 40s to their 80s take to the platform, she worked up her courage, and so did I.

After putting on a helmet, we were instructed to run from a platform down an incline, where we would be launched. After a successful first trip she was handed a noodle to try and hit a red-white-and-blue target at the end of the ride. After hitting the target, she returned with a huge smile and a thumbs up. 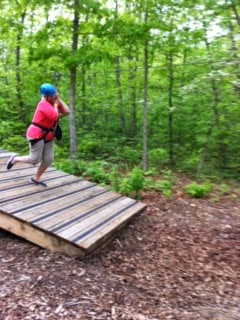 My first trip was amazing. I ran off the platform and down the incline and was lifted into the sky. My ride lasted only a few minutes, but the view was lovely. Zipping past evergreens and the winding trail below, I had a great view of the dogwoods in bloom.

Not to be outdone by my sister, I decided to try my luck at hitting the target with a noodle and opted for blue to match my helmet. Just before my ride began I asked for final instructions on how to hold the noodle while also holding onto the rope. 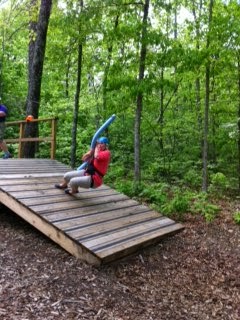 Um. I was so focused on my hands I forgot about my feet. I made it off the platform then stumbled on the incline.

I scraped the top of my right foot and twisted my left knee--the one I've had surgery on. Ouch!

But I persevered. Although my dignity took a hit, I held onto the noodle, swatted but missed, the target, and finished the ride.

After removing my helmet and harness and being treated for a flesh wound, I hobbled back to the lodge. My knee swelled up, and it has been painful to walk on, and much to my disappointment I missed the Heart Walk on Saturday.

Yep. I would. It was an amazing experience, a feeling of gliding through the fresh air among tall trees with the ground below.

A Busy Saturday: The Heart Walk at Busch Stadium and Listen to Your Mother's Show at St. Luke's

This Saturday, May 10, I'll be participating in the Heart Walk at Busch Stadium, on a team to honor my sister-in-law Gerry, who will celebrate the one-year anniversary of her heart transplant in July.

Gerry's daughter, my niece Jamie, is once again sponsoring a team through her employer, Cassidy Turley, who has donated a special prize (St. Louis Cardinals tickets) to be raffled among Jamie's team members.

Jamie and Gerry will be walking side-by-side with my brother Jim. My sister Kathleen and I will be there along with other members of the Duly and Schneider families and Jamie's Cassidy Turley family at work.

The  Heart Walk opening ceremony starts at 8:30 with the walk beginning at 9:00. Jamie's company’s meeting spot is in Section 157 in Busch Stadium.

Here's a link to Jamie's work team if you'd like to  join us in some heart-healthy exercise or donate for this worthy cause.

At the signing last Saturday for the Not Your Mother's Book: On Being a Mom, I chatted with Ellie Grossman, author of of Mishegas of Motherhood.

During our conversation, Ellie reminded me about the Second Annual Mother's Day Listen to Your Mother Show St. Louis on Saturday, May 10 at St. Luke's at 10 a.m. and 2 p.m. The show features live readings of funny, touching, and inspiring stories about motherhood. Proceeds from ticket sales benefit the local charity, Girls in the Know.

With the heart walk being on the same day, I won't be able to make this event, which is disappointing because the brilliant and funny writer Sioux Roslawski is among the featured speakers.

If you're in the local area and want to have some fun while supporting a worthy cause, check out one--or both events-- if you're able!

Book Signing Saturday, May 3 at 6 North Cafe in Ballwin 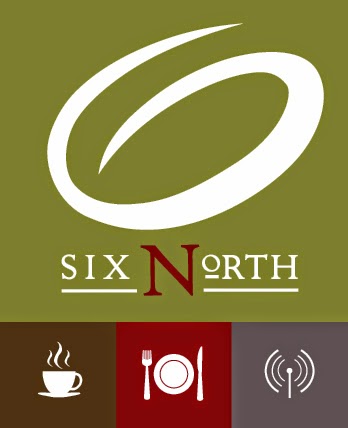 I'm so looking forward to joining several St. Louis-area writers with stories in the Not Your Mother's Book: On Being a Mom who will be participating in a "Meet the Author" event and book signing tomorrow, Saturday May 3.

Several of my writing friends will also be there, including NYMB: On Being a Mom editor, Dianna Graveman.

Other writing friends who will be on hand are: Marcia Gaye, Tammy Goodsell,  Candace Carrabus, and Mary Horner, whose wonderful story, "The Tooth Fairy's Bad Rep," was mentioned on a local radio station the other day.

The true stories in the book range from pregnancy to when the kids leave for college.

My story, "A Hairy Situation," lands in the early part of the book. It's about an embarrassing situation with my son.

If you're out and about tomorrow, please stop by and say, "Hi."