The Changing Face of Libraries

My, how libraries have changed over the years! What used to be quiet places to check out books and read in silence, are now hubs for socialization and a variety of activities.

My local St. Charles City-County Library (Spencer Road Branch) has something going on just about every day of the week. Knitting lessons, author talks, tax preparation classes, and healthy living seminars are a few events held on a regular basis. With a few clicks of a mouse, card holders can reserve the latest books, e-books, CDs, or DVDs or sign up for classes or events.

At the Spencer Road Branch Library last fall my sister and I attended a breast cancer awareness dinner co-sponsored by the library and a local hospital. The event included medical professionals and inspiring talks from survivors. Vendors, handouts, and a light meal were also available.

The following month we participated in an eight-week class for senior citizens on better balance co-sponsored by OASIS. We learned how to prevent falls, were shown how to safely preform exercises, provided healthy snacks, and were given workbooks to refer to after class completion. 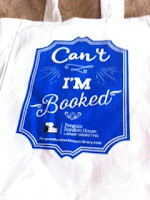 At the end of 2016, my sister, one of my critique group friends, and I attended a “Book Buzz” presentation by a library marketing representative from Penguin Random House. Not only did the library provide snacks, the publisher gave each attendee a cool tote bag that read "Can't I'm Booked." Inside each bag was a free book. My free book was a copy of Always by Sarah Jio, which is on my to-be-read list.


During the slide show presentation, the publisher's representative highlighted books to be released in the fall of 2016 and winter of 2017. Along with displaying copies of dozens of book covers, he gave a description of each book. One element I was interested in hearing about was the print run of the books, which generally is an indication that a book  will be in high demand. After hearing about so many fascinating books, immediately after the presentation my sister and I hurried to the check-out counter to add our names on the reserve list for books that were especially appealing.

Although libraries have changed from the time I received my first buff-colored library card when I was in grade school,  one thing has remained constant in my life, my love for libraries and books will never go out of style.

Dixon Hearne on "Setting as Character"

I'm pleased today to have acclaimed author Dixon Hearne as my guest blogger to speak about "Setting as Character." His works have been published widely, with his most recent, Delta Flats, published by Amphorae Publishing Group.


Dixon Hearne (photo on left) is the author of three recent books: Delta Flats: Stories in the Key of Blues and Hope (nominee, 2017 PEN/Faulkner Award) and From Tickfaw to Shongaloo (Second-Place, 2014 William Faulkner Novella competition), both set in Louisiana, and Plainspeak: New and Collected Poems. His website is dixonhearne.com


I discovered that my own little postage stamp of native soil was worth writing about and that I would never live long enough to exhaust it. ~William Faulkner


Beginning writers are often told: “Write about what you know.” Consequently, many of their first writings center on where they live and the people in their orbit. Once they have the basic elements of fiction (plot, character, setting, theme, and style), they typically feel more comfortable trying their hand at various genres. Fiction offers particularly rich ground for cultivating possibilities. Setting alone presents unlimited opportunity for experimentation.


Setting must be as well fleshed out as any other character, by the use of specific and telling details. It can't be selected on a whim, with no purpose in mind; but it must feed into the story   ~Elizabeth George


Literature is replete with examples of places imbued with human qualities—beyond mere personification, symbolism, or metaphor. Consider, for example, the characterization of the moors in Emily Bronte’s Wuthering Heights—a dark, brooding entity, ominous and ever-present, more than simply a literary device to set the tone of the story.


Consider also Scarlett’s Tara, more than mere symbol of strength and security. It beckons, nourishes, influences. She views Tara as a living entity—revels and wallows in its splendor, its spell. It is friend, healer, guardian angel. Similarly, Anne Shirley imbues Green Gables with life and joy-giving.


Examples of “setting as character” can be found in any number of novels and in noir films set in New York City, New Orleans, London, and other places alive with their own personas—where setting speaks to the reader/viewer, sets the tone/mood of the story, and exerts influence and control over characters and plot. Place is carefully developed into an unforgettable part of the story. Nowhere are examples more clear and abundant than gothic tales and horror movies set in haunted places, settings portrayed as living entities that act and react with other characters.

Examples from my own writing:


Many of my stories spring from a single image, a place in my head. I almost immediately step back and consider how place might affect my characters. They are often powerful images, like a cabin porch in fallow fields, as in my short story “This Side of Canaan.” A sweat-drenched couple and their ragged children peeking through the doorway complete the picture, tell the story.


Setting is central to my comic novella From Tickfaw to Shongaloo. Stokely, a Southern town, reflects universal themes and motives and actions. The dialect immediately identifies the geographical setting. We get to know the town as more than a place—its identity is inextricably tied up with its interactions with townspeople. Place is paramount in the story.

Delta Flats: Stories in the Key of Blues and Hope is about place as well as characters. In some cases, place is featured as a character itself, as in “Crescent City Blues,” which conjures images of decadence and a general atmosphere of laissez les bon temps rouler.

“Waves wash upon its muddy banks like the incessant beating of the Crescent City’s heart. Like eternal applause for the drama, with all its shadowy plots and subplots, unfolding in the decadent world of the French Quarter. No one escapes its influence, New Orleans. One might curse or spurn or dismiss it with the contempt of a religious zealot, but deny it—no. It floats like an island unto itself, a world shaped by half a millennium of vibrant tenancy.”


Native Voices, Native Lands brings landscapes of the Southwest and the central plains to life in story and poem. Indeed, many native Americans believe that the earth and its constituent natural parts (land, rivers, mountains, etc.) have souls. They write eloquently of waters and tribal lands as living entities.


In crafting a story that will feature setting/place as a character, one might consider the following:


How does a writer bring life to a setting—complete with mood, motive, and emotions?


How can the senses be used to add dimension and shape the character of the setting?


How does a writer introduce deliberate conflict and interaction between other characters and setting to create a believable entity. Like any other character, setting can cause problems or trouble for the protagonist(s).


Consider what motives a place might have as a character in the story. What is to be gained or lost? Use that to help develop a persona.


Create a list of words that capture conflict, mood, atmosphere, and setting. Carefully selected words add dimension and layers to place as character.


Imagine yourself as the place in the story. What do you see, feel, hear, smell? What might your own actions/reactions be?


Most importantly, read other stories—many stories—that feature setting/place as character.

Thank you, Dixon for your wisdom and advice, and congratulations on your many accomplishments.
at February 06, 2017 19 comments: