Voices from the Past Cemetery Walk at All Saints Parish in St. Peters 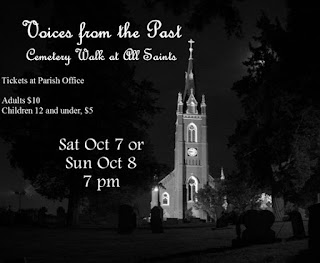 If you are interested in local history or like an evening where you can walk among the tombstones and listen to actors portraying long-ago deceased characters, you are in for a treat!

Once again, All Saints Parish in St. Peters will feature an evening of "Voices from the Past Cemetery Walk at All Saints." (If you click on the link you can see the cemetery in the background.)

This is the third time in six years the parish has offered the popular event.

And this is the third time I have written a script about a character buried in the cemetery.

The members of the parish Heritage Committee selected and researched the characters, then the Parish Administrator turned over their research to me to write the scripts. Writing a script stretched my skills, but it was a valuable learning experience.

My first script was about George Gatty, Revolutionary War hero and founder of St. Peters. He was an Italian immigrant who made his way to America, distinguished himself during the Revolutionary War, and was rewarded with a land grant that brought him out to the western frontier--all the way to Missouri! 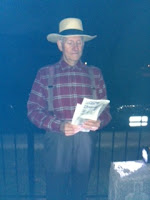 Emma had the bad habit of poisoning her husbands and anyone else who got in her way. Unfortunately, Aloys got between Emma and a life insurance policy, and Aloys lost. His family and neighbors got suspicious after his death. They had no proof Emma did him in, but after Emma's next victim, Mr. Heppermann and his daughter (who survived), the Law stepped in. Emma was eventually tried and convicted of double murder.

The photo on the left shows the actor who portrayed the late Mr. Schneider referring to his script.

From reports, the actor's portrayal of Mr.Schneider was one of the most popular, and most talked about, characters of the walk.

This year, I wrote the script for Eva Kirchner, a German immigrant and farmer's wife. Eva was a resilient and determined woman who lived a hardscrabble life. She survived during the Great Depression by taking in boarders, and during Prohibition, she survived by ignoring the law. I gave her the name, "Bootlegger Granny."

This year the cemetery walk will be Saturday Oct 7 and Sunday Oct 8.Tickets for adults are $10, and children 12 and under $5. A reception will be held in the Parish Center after the walk, where visitors can enjoy light refreshments.

Unfortunately, because of the uneven ground of the cemetery, strollers and wheelchairs aren't permitted. And, because I'm still using a walker to get around, I won't be able to attend this year.

My sister Kathleen will be going and she has promised to report back to me on how it went.