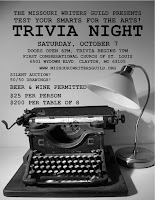 In case you haven't heard, the Missouri Writers Guild is having a trivia night on Saturday, October 7th, at the First Congregational Church of St. Louis in Clayton, MO.

The details are on the flyer on the left. The writers in Coffee and Critique, the critique group I belong to, were informed of this by Marcia Gaye, our chapter's MWG rep.

Marcia mentioned the MWG was hoping to get each chapter to contribute a basket for the event's silent auction. Our small group of ten regularly attending writers was asked to donate items or cash to fill a basket.

With our writers group name of Coffee and Critique, we voted to go with a coffee and writing-related theme.

The response was outstanding. Our members donated enough items to fill not one or two or even three, but EIGHT baskets--almost one basket for each person in our group.

When I thanked Marcia for spearheading the MWG Trivia Night basket project, she responded with her usual humility, "It was a team effort."

She added that we had 100 percent participation. Marcia estimated the value of the eight baskets around $400!

Les took photos of the baskets shown below. And I've been told Sarah did a marvelous job tying bows. 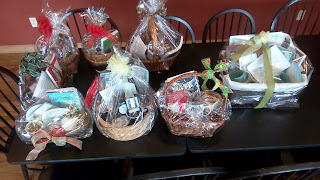 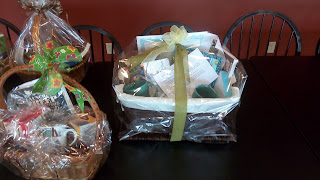 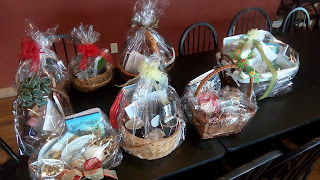 TWO CERTIFICATES FOR DETAILED CRITIQUES (up to ten double-spaced pages) from our entire group.

Although I can't attend trivia night, I'll be there in spirit--and our critique group will be there in more than spirit--we will be represented by eight beautiful baskets.

If you attend MWG Trivia Night, please let me know how it went, and I hope you're high bidder on one of our baskets!
at September 27, 2017