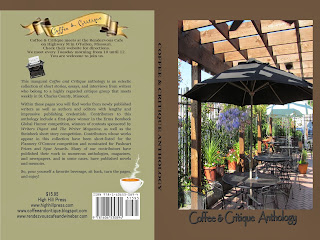 This morning I received the exciting news that the hot-off-the-press Coffee and Critique Anthology will be available for pick up tomorrow morning.

Lou Turner, CEO and Publisher of High Hill Press, will be distributing contributor copies tomorrow at the Rendezvous Café (pictured in the photo cover on the left) at 10 a.m. tomorrow morning (Christmas Eve day).

A limited number of additional copies will be available for sale.

Several contributors will be on hand to sign copies tomorrow, but the official  release date and party/signing will occur early next year.

In addition to the stories and essays, the anthology also includes group and individual photos and "Take Ten" interviews from several members, including the late Nick Nixon.

Additional copies of the anthology will be available for sale from High Hill Press soon. I'll post more about the anthology early next year.