After the horrific events in Connecticut last Friday it's been hard to get into a light-hearted mood. I've been reluctant to post more of the photos I took in Hermann. Then I thought maybe some holiday cheer might lift my spirits and those who read this post.
I started this last Thursday, then the strong winds knocked out our electricity briefly and my Internet service was down for a couple days. Unfortunately, I lost much of what I had typed to post, but fortunately the photos survived. While the Christmas decorations in St. George's rectory included Nativity scenes and religious icons, there also were touches of whimsey sprinkled throughout the four-story home.
A silver-plated knight in shining armor stood outside the Queen's room announcing the queen was not in. 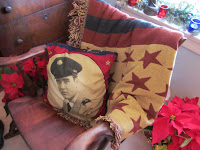 The Wizard of Oz room was complete with a yellow brick road.
The tree in the Military room had a tree with photographs of veterans, including WACs and WAVEs, and a pillow with an image of Elvis. 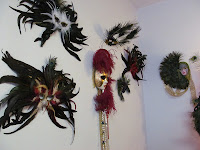 Multi-colored masks were the centerpieces of the Mardi Gras room.
After touring the rectory we headed for Stone Hill Winery for lunch and a tour.

Pelznickel, the fur clad Santa with origins in Northwestern Germany, made an appearance during lunch. 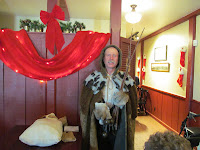 Pelznickel is one of Santa's helpers who visits kinder (children) who have been naughty during the year. He carries a stick and lumps of coal.

And after lunch at Stone Hill Winery we toured the caves where the wine barrels are stored.
At the Wurst Haus, our group was treated to sausage snacks and a demonstration of sausage making.
Hope you enjoyed this virtual tour of Hermann.
﻿ 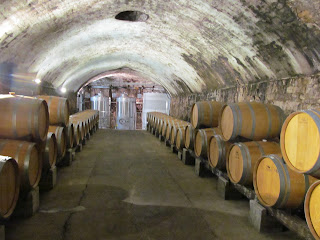 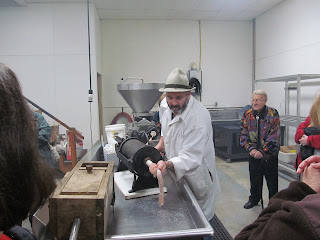