Review of Proud to Be: Writing by American Warriors 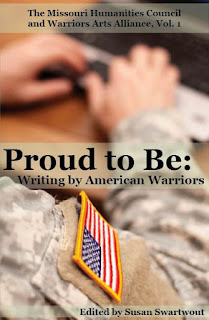 A month or so ago I received a call from Deb Marshall, Director of the Warriors Arts Alliance, asking if I would be willing to review Proud to Be: Writing by American Warriors.

In the blink of an eye I said, "Yes!" I had heard about this project some time ago and was thrilled to be asked to read and review the finished product.

The anthology is a colloborative effort among the Missouri Humanities Council, the Warriors Arts Alliance, and Southeast Missouri State University Press.

It was such an honor to read this wonderful collection of stories, poems, and nonfiction from and about Americans who have served their country in the Armed Forces. The collection includes fiction, nonfiction, poetry, and photographs.

The winning nonfiction piece selected by Mark Bowden, author of Black Hawk Down is: "Rockhappy 1944-45" from Paul Mims

The winning poem selected by Brian Turner, author of Here, Bullet, and Phantom Noise is:
"Baring the Trees" by Gerardo Mona

The fiction winner, selected by William Trent Pancoast, author of WILDCAT, is:
"First Day at An Khe" from Monty Joynes

The winner for Best Writing from a Missouri Writer, judged by the Missouri Humanities Council is:
"Between Wives" by Jay Harden

In addition to the entries from the competition prize winners and finalists are selections from other writing warriors and their family members.

One true story I found moving is "Hyphenated Americans" by Jan Morrill, in which she shares the experience of her family and in particular her uncle, Sergeant Yoshio Sasaki, as Japanese-Americans during World War II.

The selections in this anthology, edited by Dr. Susan Swartwout, are filled with discovery and daring, sacrifice and shared experiences, courage and compassion. But most of all this is an anthology of hope and healing.

Proud to Be: Writing by American Warriors is available from Amazon, Southeast Missouri State Press, and other sources.

Note: This post was supposed to appear on Veteran's Day, but my Internet service was down, then there was a problem with my router, so I apologize for the delayed post.

Second Note: Later this week I will post my interview of Deb Marshall, who shares her insight on the creation of this impressive anthology.
at November 13, 2012