Interview (Part I) with Deb Marshall, Director of the Warriors Arts Alliance

I'm pleased today to welcome Deb Marshall, Director of the Warriors Arts Alliance, to Donna's Book Pub. I met Deb several years ago at a Saturday Writers meeting and got to know her when she was president of the Missouri Writers' Guild. She is a writer with vision and energy and compassion. I'm certain those characteristics are what led her to get involved with the creation of the anthology Proud to Be: Writing by American Warriors, a collection of stories, poems, photos and articles written by and about American warriors who have served in the Armed Forces.

Here's Part I of my interview with Deb: 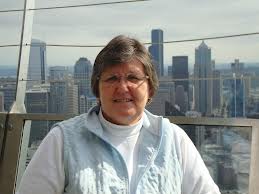 Donna: Welcome to Donna's Book Pub, Deb. I'm so happy you could take time from your busy schedule to answer my interview questions. The Proud to Be: Writing by American Warriors (Volume I) is an inspiring anthology filled with moving stories, poems, photographs and nonfiction pieces from veterans and their families. Where did the idea come from for the anthology?


Deb: A handful of St. Louis area poets and writers led creative nonfiction and poetry workshops for veterans at Jefferson Barracks VA Medical Center. We had veterans from the Korean War to the Iraq and Afghanistan wars participating and the writing they were doing for the workshops were very individual stories, but their messages reflected the same sentiments, regardless of the generation it represented. We opted to put an anthology together to reflect a variety of voices from many generations.

Donna: Several organizations worked together to make this anthology a reality. What can you tell me about these organizations and their interaction?


Deb: The Missouri Humanities Council provided laptops for our workshops at Jefferson Barracks, but they also partnered with the Missouri Writers’ Guild to publish the “Storm Country” anthology to raise money for Joplin’s school libraries while I was president of MWG last year. Since the veteran writing initiative has continued to grow in scope, it needed to have its own organizational structure, so the Warriors Arts Alliance was born as a spin-off of the Missouri Writers’ Guild and is partnered with MHC.


I consider our editor Susan Swartwout a great gift to this program. She brings a proven publishing track record at SEMO University Press and over two decades of editorial experience, but, in this case, her role extends beyond that. There are bumps in the beginning of any start-up project, and this one was no different. Susan has been able to not only help us put those bumps behind us, she has also been instrumental in paving a new path.


We have an unusually well-balanced relationship between the three organizations.

Donna: Included in the anthology are contest winners of poetry, fiction and nonfiction. How did the contest work?


Our editor made selections for the first round. These were then forwarded to our judges, who each selected two finalists and a winner for each genre – fiction, creative nonfiction and poetry.


Donna: The list of contest judges is impressive, and the judges did an excellent job selecting the winners. What can you tell us about the judges?


Didn’t they do a fantastic job?


William Trent Pancoast judged fiction. His character development of the Vietnam vet character in his novel Wildcat was superb and his reputation for being “the blue-collar writer” made him a good choice. Plus, he’s just a really nice guy and a true gentleman to work with.


Although Mark Bowden didn’t serve in Iraq as many people believe, he was a journalist imbedded with our troops for an extensive period of time. His book Black Hawk Down was probably the first nonfiction work to come out of the Iraq War.


Then there’s Brian Turner, another one of the literary giants to come out of the Iraq War in which he served as an infantryman. Now he teaches poetry. Brian had already agreed to be our judge before he was a speaker in St. Louis for the first St. Louis Humanities Festival last April. He is revered by his soldier/poet contemporaries, but he’s a wonderful down-to-earth guy who gave directions to people in the hallway who were attending his reading at Webster University.


Beyond the contest winners, what was process for selecting submissions for the anthology?


Deb: That one you’d have to ask Susan. We talked at great length about my “vision” for the anthology. She did the rest. The selections and their order in the book is all hers and I couldn’t be more pleased with the way it turned out. Susan edits “Big Muddy” and “The Cape Rock,” so she’s tuned in to literary journals and what works well within a writing collection. Her ability to take what I thought the anthology should reflect and turn it into the final anthology has set the bar pretty high for any future editors I may work with. Our contributors are raving about their pride in the overall book, not just having their work published.

Thanks, again, Deb for insight into the making of this amazing anthology.

Please come back tomorrow  for Part II of my interview, in which Deb will discuss plans for another anthology.
at November 15, 2012