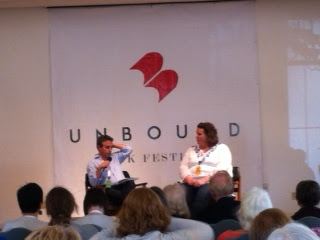 This is the final installment of my notes and observations from the absolutely fabulous inaugural Unbound Book Festival in Columbia, Missouri, last month.


During the last event of the day, Alex George, Unbound Book Festival’s seemingly tireless festival founder and director and author of A Good American, sat down for a conversation with the very personable author of The Weird Sisters, Eleanor Brown. I found their conversation the most personal, relaxed, and enjoyable activity of the festival.


Alex and Eleanor, self-described “twins,” candidly talked about their writing processes and her soon-to-be-released novel, The Light of Paris, which Eleanor described as a story of “art, passion, and escaping other people’s expectations.”


I felt like I was sitting at a kitchen table with two fascinating and friendly authors chatting about writing; here are a few highlights:


The power of story makes us feel we are not alone; it’s reaching out to people.


The Light of Paris came about after Eleanor discovered letters her grandmother wrote home while she was living in Paris in 1924.


Eleanor’s latest book is her “never book,” something she said she’d never write -- a parallel narrative with two story lines, including letters and journals.


Parallel narratives have to connect.


Writers must know whose story it is.


First person is tricky because the narrator is unreliable.


Writers cannot control what other people think about their book.


After you’ve written it, the book belongs to the reader.


Research is important to draw forth images of place.


Can’t always be factually true, but must be emotionally true.


Either you plan out on the front end or you’ll have to on the back end.


Eleanor wrote The Weird Sisters “by the seat of my pants” and described her first draft as a “hot mess.”


The Light of Paris was planned out; her first draft took two months.


It’s scary to do something unfamiliar, but think about the “happiness of possibility.”
***


After a long, but thoroughly enjoyable, day Diana Graveman and I met up with my Mizzou-student granddaughter. She drove us to Trops, where we stood in a long line behind other thirsty patrons. We each bought a different kind of frozen tropical-flavored drink, which I’d describe as alcoholic snow cones. Yum! It was a delightful way to cap off a wonderful day.


I hope the Unbound Book Festival will become an annual affair. It was an inspiring and educational event for writers and readers alike.
And I hope my blog visitors have enjoyed these posts about the festival.
at May 17, 2016