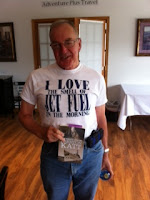 If you would like to read my complete review of Jack's latest novel, visit the Coffee and Critique blog.
at June 02, 2015