We Flipped Over Fripp on our June Vacation Trip 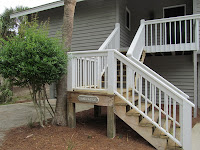 Last month, Berta Rosenberg, one of my generous and kind-hearted writer friends, e-mailed and invited my family to spend a week in one of her beach houses on Fripp Island, South Carolina.

Berta and her husband Mark, of Rosenberg Properties, own several houses on Fripp, including Sandcastle, the five-bedroom, two-story we stayed in.

My hubby doesn't like to venture much farther than St. Peters or 90 miles away to our place in Osage County, Missouri, so he wasn't up for the trip.

But my teenaged grandkids were thrilled, and they asked to invite their other grandmother (from their dad's side) to accompany us. 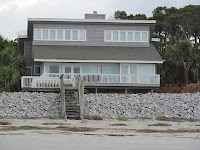 Our original plan was to fly, but after checking out the airfare prices to Savannah, we decided to drive. Thanks goodness for GPS!

Fripp Island is a golf resort and scenic wildlife sanctuary. Located in the Lowcountry of South Carolina, Fripp Island is not far from Hilton Head, about mid-way between Savannah and Charleston. 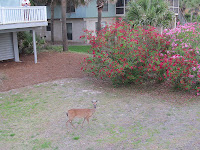 I'm not gonna lie: the drive from Missouri was long, with lots of road construction, traffic,  and some rain.  On the drive to South Carolina, we spent the night in Tennessee.

As soon as we arrived on Fripp, the first thing the kids did was go to the back deck and look at the ocean. Big surprise! We were treated to a bird's eye view of deer wandering through the yard.

Because of Fripp's wildlife sanctuary status, deer (and turtles and alligators) are protected. You can look, but don't touch--and don't you dare feed them. Umm, who would want to feed an alligator, anyway?

Our time on the beach was lots of fun and much too short.

Our vacation was filled with sun and sand and sea shells--and we saw a shark and endured a storm. When we ventured off Fripp to the pier on Hunting Island, a woman who had been fishing that day told us she had mostly caught baby sharks like the one above. 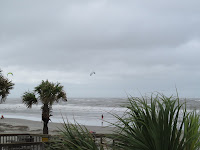 Tropical Storm Andrea made its presence known the night before we left. The wind blew furiously, the waves crashed against the shore. I made sure the flashlights I brought along were not far away, in case the electricity went out. It didn't.

The morning of our departure, I righted the overturned deck chairs and picked up branches and debris from the front yard. Back on the beach that morning, parasailors braved the winds, which had died down a bit, but were still strong enough to blow the sails.

As I told my grandkids, surviving a tropical storm made our vacation even more memorable.

The only low point of the trip was the long drive back, especially the traffic, construction, and accidents in and around Atlanta, and right under the Gateway Arch in St. Louis. After I drove home for 12 hours, my granddaughter took over in Kentucky until we arrived in Missouri.

We made it home safely, with lots of memories of our trip to Fripp!