Last month over on Cathy C. Hall's blog I read about a flash fiction writing contest with no entry fee. Cathy is a funny and generous writer from Georgia who shares contest information and whose posts generally are a hoot. 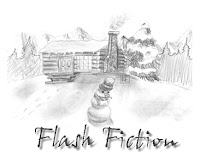 The theme for the contest Cathy posted about was "Snow." The contest was sponsored by Elizabeth Guy on her ReadingWriters site. Talk about timing, that was right around when our record-setting low temperatures appeared to accompany our snowstorms and blizzards. With snow on my mind, I dashed off an entry, just shy of the 100-word limit.
Last week Cathy e-mailed that our stories made it through the first round. Along with about 80 others we made the cut for "Excellence in Milieu, The Ambiance of Snow." That was out of 388 total entries. Yipee!
When I checked the site I noticed the names of two more writer/bloggers I know, Claudia (aka Bookie) and Linda. Yesterday I checked again and discovered all four of us were among the around 40 finalists who made it through to the second round. The second round was for "Excellence in Storytelling, The Structure within the Snow. " So, what better news than finding out that not only I made the cut, but so did three other of my writer/blogger buddies. The winner will be announced on February 1.

To top that off, last week I received an SASE with results of a contest sponsored by the friends of the Decatur, Illinois Public Library. Some months ago I submitted "Santa Wore Cowboy Boots" in their essay contest, which permitted previously published works. I was pleased to find out my essay received an honorable mention and a commendation. What was neat about their contest was the judges provided comments for the top 10 winners in each category. The bad news is that at the top of the sheet which provided the names of the winners the words "Cancelled for lact of interest" was printed. So, I'm not sure if they will have the contest again next year.
My lesson from all this is to keep on submitting and share good news with your friends!
at January 25, 2010